The demand for private aircraft is taking off to new heights in China 15 years after the country's first personal airplane hit the sky, said industry experts.

In 1997, Broad Group's CEO and Chairman Zhang Yue purchased a Cessna Citation jet and became China's first personal craft owner. By the first half of 2012, the number of the country's private business craft rose to 126, Jin Junhao, an official in charge of general aviation at the Civil Aviation Administration of China, told the China Aviation News.

The market started to boom in 2009 and has since forged ahead rapidly, according to Jason Liao, CEO and chairman of China Business Aviation Group, a major business craft dealer in the country.

Liao said there were fewer than 30 business craft across the nation back in 2007 but more than 80 were delivered to China between 2009 and 2011.

He also expects another 70 to 80 to join the private business fleet by the end of this year, adding that he thinks the figure will increase 25 percent annually from this year onward. 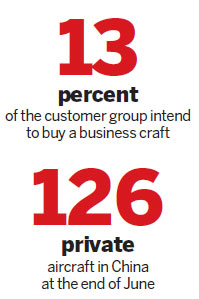 His optimism in the Chinese market is shared by leading manufacturers in the industry.

"We sold our first new Falcon to China in 2006 but the market has now grown to become our largest for new aircraft orders and our most promising," said John Rosanvallon, president and CEO of Dassault Falcon, a subsidiary of Dassault Aviation.

Dassault Falcon also announced in September that a regional customer service headquarters is scheduled to start operation in early 2013 in Beijing to better cater the needs of Chinese customers.

The Brazilian aerospace conglomerate Embraer predicts in a report on its website that 470 business airplanes will be delivered to China from 2010 to 2020, accounting for 6.8 percent of the global market and making the country the second-largest after the US.

The rapid growth in China is due to a series of factors, one of them the growing population of super rich in the nation, said Tammy Qiu, Cessna's Asia Pacific marketing director.

Though the prices for business craft vary widely - the Airbus CJ 319 is priced at $96 million and the Cessna Citation Mustang sells at about 20 million yuan ($3.21 million) - industry insiders say target customers should have minimum assets of 100 million yuan.

There are at least 63,500 individuals in China who meet the requirement and 13 percent of them intend to purchase a business craft, according to the Hurun Chinese Luxury Consumer White Paper 2012.

Candy Zhao, marketing director of the China Business Aviation Group, said over 80 percent of the companies' clients are private business owners, with most of the other 20 percent showbiz celebrities.

The government is also helping boost the market through a series of favorable measures.

Li Jiaxiang, head of the Civil Aviation of China, said in early September that a number of airports specially designed for business craft are expected to be built around major cities including Beijing and Shanghai, according to the China Economic Weekly.

It is another move to fuel the market after civil aviation authorities issued a 15-article regulation in 2009 to speed up development of general aviation in China. Among other things, they cut the time required for approval of private flights from several days to several hours, Zhao said.

The China Economic Weekly reported that the civil aviation authorities also plan to expand the reform by 2015 to open all the country's low-altitude airspace to the general aviation industry. More than 36 percent of the space has been available since January.

Though the reform has no direct effect on private business craft, the authorities' attitude toward the general aviation industry sends a signal that the long-awaited market boom is around the corner, said Embraer in its report.