More than 3,000 Chinese residents were among the global survey of 48,643 people in 44 countries conducted by the US-based Pew Research Center. The survey released on Tuesday was conducted last spring. Pew provided the questions and hired local polling firms to gauge public opinion on trade, foreign investment and related issues. Results reflect the demographic tendencies found in each country regarding gender, income, educational levels and other factors.

Nearly 90 percent of the respondents in China said trade was good and over 60 percent believed that trade increases wages and jobs.

"That is not surprising," said Bruce Stokes, director of global economic attitudes for Pew in an interview with China Daily on Wednesday. "In China where exports, jobs and wages have been rising, people have a favorable view of trade. However in mature or developed economies like the US, only 20 percent said trade increased jobs."

As for Americans, they were among those least likely to say trade creates jobs or improves wages, according to the survey. It found that 50 percent of the respondents said trade destroys jobs, while just 20 percent said it creates them. 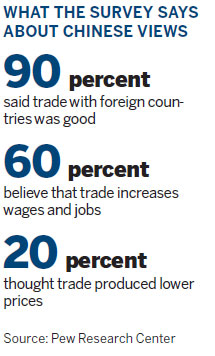 Americans were far more likely - 45 percent to 17 percent- to say trade reduces wages, instead of raising them, according to the survey.

"What this means is that one of the main economic arguments for increased trade - that it lowers prices - is simply not believed. Either people don't realize it or they haven't experienced it," said Stokes.

Although the Chinese overwhelmingly support trade and foreign investment, they appear to draw a line when it comes to foreign firms buying Chinese companies. Only 39 percent of the Chinese surveyed approved of foreign companies acquiring a Chinese firm.

When asked whether foreign companies building new factories in China was good, the response improved to a little more than 50 percent.

Stokes said governments trying to secure political support for major trade deals face will need to address some of the concerns that are found in the survey.

"In emerging economies where wages and jobs have been increasing and China is a perfect example, there is less negativity on trade. But what will happen in China if there is a slowdown - will the Chinese become as skeptical on trade as other countries?"