Shares of China's largest property developer, Vanke, based in Shenzen, surged more than 13 percent in Hong Kong, the first trading day after the rate cut.

"Real estate is one of the industries' most sensitive to monetary policies," wrote Yi Huaqiang, analyst with Beijing-based Huarong Securities, in a note. "Historically, every interest rate cut is a strong stimulus to the real estate sector."

China's real estate market has been struggling in 2014. In the first three quarters, sales of commercial properties decreased 8.6 percent, while inventories increased 28 percent, according to the National Bureau of Statistics (NBS).

Sixty-seven of 70 cities monitored by the NBS reported falling housing prices from the year-ago period in October, at an average rate of over 2.6 percent. Property developers are struggling to clear their inventories through discounts.

In some cases, the discounts could be so large that earlier buyers who paid higher prices smashed developers' offices seeking compensation.

The interest rate cut makes both property developers and home-buyers pay less interest, helping both the construction of and purchase of properties, according to Yi.

The liquidity injection also will boost international trade, said James Bacchus, a former chairman of the World Trade Organization's Appellate Body, as it creates demand for commodities and Western-made products.

The move will also "cause the Chinese yuan to fall against the US dollar", said Guild. "This will create demand for US dollars and US stocks."

"It's good for everyone," Bacchus said.

However, "construction and basic materials are no longer the growth sectors of the Chinese economy", said Guild, as those sectors already are large and unlikely to grow as fast.

"We believe that China will pursue both structural reform and growth," he said.

He told China Daily that lower rates will benefit industries outside real estate, and that the Chinese government should still look to have an economy driven by consumption rather than investment. 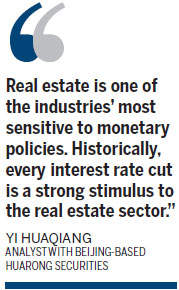