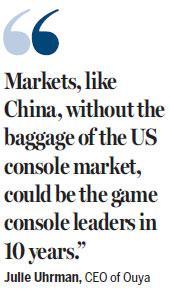 "Markets, like China, without the baggage of the US console market, could be the game console leaders in 10 years," said Julie Uhrman, CEO of Ouya, a US video-game service provider that received its latest investment from Alibaba this week. "Western developers are keen to bring their games abroad."

Chinese Internet giant Alibaba is investing a sizable amount of funding in the initially crowd-funded Ouya, confirmed by both Alibaba and Ouya to China Daily on Wednesday.

Ouya will work with Alibaba Group to bring the Santa Monica, California company's expansive library of more than 1,000 games to China on Alibaba's Tmall set-top box, which runs YunOS as an operating system andallows users to shop, watch movies and television shows and play cloud-based games on their televisions.

Even though the investment was reported by The Wall Street Journal as $10 million, Alibaba and Ouya declined to confirm that number.

Alibaba believes Ouya's deep relationships with the game-developer community and strong pipeline will enhance its digital entertainment offerings and increase user engagement and experience on Tmall set-top box, she said.

"By building upon our strength in China's e-commerce industry, we strive to bring to users a broad spectrum of consumer offerings, such as content, in order to fulfill our vision of becoming central to the everyday lives of our customers," she said.

There has been tremendous interest to bring gaming to televisions in China following the Chinese government's decision to lift its 14-year ban on game consoles, Uhrman said.

Chinese gamers' familiarity with downloadable, free-to-play games makes the China market a natural fit for the new wave of digital game consoles - in which Ouya is the leader, said Uhrman.

Exporting games to Alibaba's Tmall set-top box is only part of Ouya's Everywhere initiative launched in 2014. The initiative mainly brings Ouya's platform and games to other devices.

Alibaba is not the first Chinese Internet giant partnering with Ouya. Last September, Ouya and Xiaomi, headquartered in Beijing and now the world's third-largest smartphone distributor, agreed to a partnership to enable Ouya to have its own channel on the Xiaomi software that is installed on the MiBox and MiTV devices. Through the channels, Chinese gamers can purchase and download Ouya-developed games, according to Ouya.

Ouya will continue to support Xiaomi and expect to have some games live soon on its platform. The new deal with Alibaba will not impact on our partnership with Xiaomi, said Uhrman.

Chinais the world's third-biggest gaming market. Revenue in the Chinese video-game industry grew by over one-third to almost $13.8 billion in 2013, slightly higher than several estimates from Western research companies, according to an industrial report released by Newzoo, a game-market research agency.

After the government lifted the ban on game consoles last year, the Xbox One has been the first new game console sold in China since 2000. China implemented a strict ban on the sector in 2000, with businesses and individuals unable to operate in the manufacture and sale of consoles and games.