By Agencies and Paul Welitzkin in New York(China Daily USA)

China is no longer in vogue with e-commerce investors as money returns to the US and Amazon.com Inc following a brief fling with Alibaba Group Holding Ltd and its 367 million customers.

With a market value of almost $246 billion, Amazon is once again the world's most valuable e-commerce company, a spot it lost after Alibaba's record-setting $25 billion initial public offering in September.

Alibaba's current market capitalization is about $184.4 billion, down around 30 percent from its peak in November. Amazon shares closed down $1.82 at $525.64 in Wednesday trading.

Alibaba reported earnings on Wednesday showing that quarterly sales grew at their slowest pace in three years, with transaction volume short of estimates. Alibaba also announced a $4 billion share-repurchase program over two years, aimed at offsetting the impact of its share-based compensation programs.

Revenue for the three months through June rose 28 percent to $3.27 billion, well below a forecast of $3.39 billion in a Thomson Reuters SmartEstimate poll of 28 analysts.

The company's results come at a time when China's economy is expected to grow at its slowest pace in a quarter of a century. Adding to investor concerns, China devalued the yuan on Tuesday, guiding the currency to its lowest point in almost three years.

"You can't overlook the China slowdown," said RJ Hottovy, an analyst at Morningstar Inc in Chicago. "Chinese consumer spending trends are in a slowdown."

Alibaba's Chief Executive Daniel Zhang told CNBC on Wednesday that the company was closely monitoring the economy but was "confident for long-term growth".

The company is now branching out from its core online-only shopping platforms in a bid to stem slowing growth in both revenue and the value of sales over its websites.

"(We) made significant progress monetizing our mobile traffic, with our mobile revenue exceeding 50 percent of our total China commerce retail revenue for the first time," Maggie Wu, Alibaba's chief financial officer, said in a statement.

But Wu conceded that mobile was still less profitable than business via personal computers, where profitability also decreased.

"While we remain positive on BABA longer term, we see multiple overhangs for this name near term," Summit Research Partners analyst Henry Guo said in a note.

Alibaba announced on Monday that it would invest $4.6 billion in leading Chinese electronics retailer Suning Commerce Group Co Ltd, its biggest step yet toward integrating online and store-based shopping. 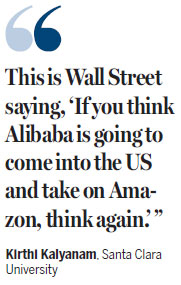 The deal could give Alibaba more traction in logistics and electronics, areas in which expanding rival JD.com, China's second-biggest e-commerce site by sales, specializes.

Alibaba's non-GAAP net income rose 30 percent from a year earlier to $1.5 billion for the three months through June, the first quarter of its fiscal year.

Investors viewed Alibaba as a profitable alternative to the free-spending ways of Jeff Bezos, Amazon's chief executive officer. Now, concerns are focused on China's cooling economy and slower consumer spending, as well as Alibaba's reluctance to aggressively pursue business in the US.

Meanwhile, Amazon impressed investors last month when it reported a surprise second-quarter profit, thanks to its fast-growing cloud-computing business and spending discipline.

For now, the e-commerce giants are mostly steering clear of each other's home turf.

Amazon is focusing its overseas growth ambitions on India after investments in China failed to gain traction.

Amazon has the advantage of being publicly traded for almost two decades, said Kirthi Kalyanam, director of the Retail Management Institute at Santa Clara University.

"Familiarity creates a big advantage for Amazon," Kalyanam said. "This is Wall Street saying, 'If you think Alibaba is going to come into the US and take on Amazon, think again.'"

"I think the fear that this miss could be an inflection point for Alibaba is a bit overreacting from the market," Jack Liu, senior vice-president at Chardan Capital Markets, wrote to China Daily.

12 firefighters among 44 killed in Tianjin explosions