By Yang Jun and Zeng Jun in Guiyang(China Daily)

Parents who fail to take care of their left-behind children properly will be deprived of their guardianship rights, according to a guideline that aims to improve care for such youngsters in Guiyang, the capital of Guizhou province.

It states that bodies, such as civil affairs and education authorities, should apply to a court to deprive the guardianship rights of parents who are outside their home area but refuse to assume their guardianship role.

Other relatives of the left-behind children, such as their grandparents and adult siblings, can take on the role of guardianship only after obtaining the approval of the residents' committee in the village or residential area where they live. They must also complete legal procedures such as signing an agreement, according to the guideline.

Courts can designate the civil affairs authorities as guardians of left-behind children so that child welfare institutes can receive them if necessary, the guideline states.

It defines left-behind children as those age 14 or under living at home with only their grandparents while their parents have migrated for work for more than three months.

The guideline also applies to "children living in difficulty" in Guiyang, such as homeless youngsters, those living with serious diseases such as AIDS, and those whose parent or parents are in prison.

The local government must take responsibility for protecting left-behind children and children living in difficulty, and appeal for their parents and other guardians to assume their responsibilities, the guideline states.

A similar guideline to protect left-behind children that covers Guizhou province is being discussed and is likely to be released at some stage, according to the provincial Civil Affairs Department.

Guizhou, a major exporter of migrant labor to other areas of China, has been hit by a series of incidents involving the deaths of left-behind children in recent years. 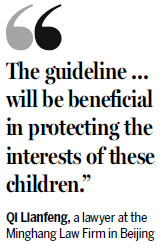 A recent case that stirred heated public debate involved the deaths of four children in a village in Bijie in June. The four, between ages 5 and 14 and without care after their parents left home, died after taking pesticide, police said.

Qi Lianfeng, a lawyer at the Minghang Law Firm in Beijing, said: "The guideline is consistent with China's Civil Affairs Law. It clearly specifies that others should be designated as guardians of left-behind children if their parents are disqualified, and it will be beneficial in protecting the interests of these children."

He said civil affairs authorities in Guiyang should launch a thorough investigation so that all left-behind children in the city are covered by the measure, and this will require financial and personnel support from the local government.

Zhu Nijiang, a migrant worker from Yangchang, a township in Guiyang, said that depriving parents of guardianship may cause harm to left-behind children.

"After their parents are disqualified from guardianship, the children may be sent to a welfare institute," he said. "This may make them feel that they are orphans."

China has more than 60 million left-behind children - most of them in rural parts of less-developed western and central areas, according to a report released by the non-governmental organization Shangxuelushang in June.

Wang Xiaodong in Beijing contributed to this story.

Anti-corruption campaign 'good for China, US'

Bomb in centre of Thai capital kills at least 12

US pilot is remembered in book, film

Sodium cyanide in Tianjin to be collected, neutralized