By Zhang Li In Guilin, Guangxi and Li Yingqing in Kunming(China Daily)

The Hump was one of the most important air routes connecting China with allied forces in South Asia. During the war, about 850,000 metric tons of supplies reached China from India via the route, though about 1,500 US planes crashed along the way - victim to the formidable mountains of the Qinghai-Tibet Plateau and their fickle, often nasty, weather conditions. Pilots said the huge ridges looked like humps, thus the moniker.

The American Volunteer Group, also known as the Flying Tigers, took on the dangerous mission, and American C-47s delivered the first, small load of supplies in July 1942. 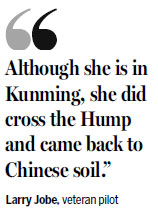 The plane currently has five crew members, including two from the United States and three from Australia. Their average age is above 70 years.

Larry Jobe, the captain of the first flight who now serves as president of the historical organization, said he wants to honor the men and women who risked their lives flying the Hump and preserve the memory of what China and the United States accomplished.

Beginning in Australia on Aug 13, the final flight over the legendary route was pretty smooth until Indonesia, where one of the aircraft's engines blew out. After six weeks of repairs, the plane took off again and finally made it over the mountains to Kunming on Saturday.

"Unfortunately," Jobe said, "before landing in Kunming, we had to shut another engine down. The plane is not flyable."

As the single most important aircraft for China's survival of the war, the C-47 once transported fuel, ammunition and oxygen that China needed in the China-Burma-India theater.

"Without the supplies, Burma and its fighters would be nothing more than ground targets for the Japanese," he said.

The plane has served many useful missions during its life.

Before the historical organization bought the plane, it was used in movies, Jobe said.

"They painted it up and named it 'Buzz Buggie'. We kept the name because we found a B-24 Burma aircraft called Buzz Buggie had also flown the Hump," he said.

At the moment, the plane cannot continue its journey. The plan is to fly it to Guilin after repairs are made.

"Although she is in Kunming, she did cross the Hump and came back to Chinese soil," Jobe said.