Stamping out a fire

China's standing in the world is not shaped by the dragon, which in itself can evolve into any artistic manifestations artists see fit.

Can you guess to whom these two names belong?

They are Bruce Lee and Jackie Chan - two of the biggest kungfu stars of all time. Their Chinese names are literally Li Little Dragon and Becoming Dragon.

That exemplifies how we Chinese perceive the dragon.

The dragon is one of the 12 animals of the Chinese zodiac, ranking fourth in order but first in terms of understanding folklore's influence.

It is the only zodiac animal that never existed in the real world. It is a composite of nine animals: the snake, camel, elk, deer, mussel, carp, eagle, tiger and ox.

That obviously gives artists a lot of leeway in creating their own versions of the dragon.

And whoever designed this year's dragon stamp took this liberty in big strides. 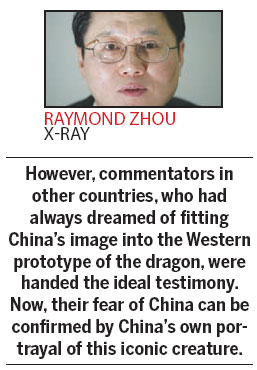 The result is a dragon that's so fierce that it took many by surprise. The Chinese phrase "flashing the teeth and wielding the claws" would be an apt description for it.

There was a wave of discontent among domestic audiences who saw the stamp. Their main argument was that whatever animal is used for the New Year image should look auspicious. Otherwise, it would violate the holiday spirit. But according to some online surveys, this opinion adds up to no more than a quarter of those polled.

However, commentators in other countries, who had always dreamed of fitting China's image into the Western prototype of the dragon, were handed the ideal testimony.

Now, their fear of China can be confirmed by China's own portrayal of this iconic creature.

What can be more gratifying than that?

As if to play into these outsiders' hands, Chen Shaohua, the designer, revealed that he did intend for his image to embody Chinese people's "self-confidence".

He seemed oblivious to the fact that what he deemed self-confidence others would readily call aggressiveness. It's so easy to cross the thin line between the two qualities.

But one thing we should not forget is that the dragon stamp was not commissioned by China's Ministry of Foreign Affairs, which probably did not have a chance to vet it, as the affair does not involve other countries.

At best, it was approved by some authorities at China Post.

Had they known it would whip up a worldwide storm, they might have resorted to the old style of majesty and solemnity.

Chinese government agencies are not known for courting controversies - especially uncontrollable ones.

In a sense, the artist who designed the stamp should be applauded for swerving to an unconventional interpretation that embodies his own subliminal message.

Chinese artists sometimes couch their own thoughts in commissioned projects that do not offer a lot of room for freedom of expression, often in ways that are vague and yield to disparate explanations.

Many who take to the dragon stamp cite the reason that it is ideal for scaring away evil spirits, which - if you think about it - was the original purpose of setting off firecrackers and posting door couplets.

We Chinese have at least two interpretations - usually polar opposite - for every sign and phenomenon, partly to ensure we'll end on a propitious note in even the worst event.

So, the dragon can be magnificent or menacing. It's all in your eyes.

One thing the dragon is definitely not is cuddly.

For that, the job is handed to the panda, which, in my humble opinion, has been acting as China's unofficial ambassador for the past few decades.

Even if the dragon were not a fictitious animal and had been domesticated, I doubt it would be loaned to zoos around the world.

Chinese people's obsession with the dragon can be traced back to two origins: One is agricultural, and the other is imperial.

The first one bases the dragon on the snake. It is a kind of water snake that can fly.

When there is a drought, the dragon would fly up to the sky and shower rainwater across the land. In this interpretation, the phoenix is responsible for generating wind.

Of course, the Chinese mythology is much richer and more complicated than that.

It has created many different forms of the dragon - some for heaven, some for earth and some for the elements.

The four mighty rivers in China are said to be dragons that were transformed into waterways.

However, the dragon leader supposedly originated from Qiantang, the bay in what is today Zhejiang's provincial capital, Hangzhou.

This may confirm the suspicion that the earliest dragon legend could be from the ancient Yue culture.

Ancient people attributed the caprices of the weather to the dragon's mood swings.

I'm sure some would have cursed the dragon for bringing floods.

But, overall, people seemed to be optimistic about the benign nature of this at best partially visible creature, so conceived because it flies through clouds at lightning speed.

As the link between heaven and earth, the dragon occupies such a unique position in the divine hierarchy that the emperor of olden times would naturally snatch it as the best symbol of his rule.

To a certain extent, he usurped it from the common people. While he wore the dragon robe on the dragon throne, a commoner would have been beheaded for stitching this symbol on his rags.

Modern Chinese fascination with the mythical deity could as well be the result of our association of it with absolute power.

Sure, nobody would want to use the mouse or the rooster as the avatar, but what about the tiger?

The big cat is known for its masculine beauty and prowess.

Yet, only a bandit would use the tiger as his emblem, as the one in the revolutionary classic Taking the Tiger Mountain by Strategy.

A tiger can be ferocious, but it can also be defeated, as in the story of Wu Song, who beat one to death while drunk.

A dragon, on the other hand, is beyond human reach.

Only in Western legends is the dragon slain as a coming-of-age ritual for youthful heroes, such as Siegfried in Wagner's Ring cycle.

In truth, the dragon is an archetypal representation of evil in most Western mythological tales and is thus prone to negative stereotyping by China detractors who find fault with the inexorably rising nation.

For this reason, some scholars in China have floated the suggestion that the Chinese dragon adopt another English moniker, perhaps a transliteration like "long" or "loong".

But it is not as effortless to change an unofficial national symbol as a corporate logo.

Besides, a transliteration carries risks of its own. First of all, it essentially wipes out wholesale the usefulness of the icon from overseas influence of Chinese culture, as few would bother to learn it anew. Second, even if the new translation gains traction, English speakers may freely associate it with length (long) or dementia (loony).

You can treat the dragon as China's mascot.

Whatever image you conjure up with it, it reflects or reinforces your existing view of China.

The dragon cannot dictate China's international image; rather, it is the other way around. It is the country that determines how outsiders will see its symbols.

Of course, you can detach the animal from the country and see it in a purely aesthetic light.

As such, the dragon may delight, bewilder or intimidate you.

But you have to remember that it does not have one uniform visual depiction.

Like all animals, it can be shaped by whatever you want it to be. If the panda can be an ass-kicking martial artist, as in Kung Fu Panda, who says the dragon cannot someday be lovey-dovey.

Well, the Disney-animated Mulan presents a miniature dragon that is chatty and funny.

Napoleon once compared China to a sleeping lion. I don't know where he got that analogy. It shows that the dragon is not the only animal delegate accepted overseas. So, we might as well laugh about its being misunderstood.

Meanwhile, philatelists are having a field day, bumping up the price of the new dragon stamp tenfold in the few days since its release.

The controversy has probably helped the trend.

Fortunately, rising stamp prices do not hurt the public like rising real estate does.

Hopefully, this soaring dragon with its awe-inspiring teeth and claws, and rainmaking ability can disperse the shower of power to more people in the Year of the Dragon.