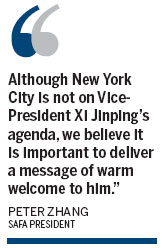 Produced by the Sino-American Friendship Association (SAFA), the video, titled Sino-American Friendship, a Witness to History, was shown to the audience every five minutes from 7 am on Tuesday to 1 am Wednesday morning, showcasing the historical moments Xi experienced with the US in previous years beginning with his visit in Iowa back in 1985. The next event was the welcoming of Obama in Beijing in 2009 followed by a meeting with Biden at Qingchengshan Senior High School in China's Dujiangyan city.

"Although New York City is not on Vice-President Xi's agenda, we believe it is important to deliver a message of warm welcome to him," said Peter Zhang, president of SAFA.

"This is the first time for us to display such a video to welcome a Chinese leader at the center of New York. Times Square has long been attracting tourists from all around the world, so we believe it is a great opportunity to play the clip here, bring him (Xi) closer to the American people, and to let them learn more about this Chinese leader."

Rachel Cashon is one of many tourists from Florida visiting New York at this time of year who saw the video clip "It was nice to be informed about the Chinese leader," Cashon said.

A promotional video on China was shown in Times Square prior to President Hu Jintao's US visit in January, 2011.

An estimated 1.7 million people pass through the landmark every day.