China's array of changes, through the lens

Although photography was introduced to China in 1842, just a few years after the invention of the camera, superstition and fear of the unknown kept the medium from truly developing as an art form for over a century.

Some thought the camera could steal the subject's soul, a suspicion shared with Native Americans. But as artists from China have risen in world esteem in recent years, so have the country's photographers.

A new exhibition of contemporary Chinese photography attempts to convey a breadth of views regarding the rapid changes in China over the past decade. In total, there are 80 works by 34 photographers, many of whom have never shown in the US.

Rising Dragon: Contemporary Chinese Photography is on display at the Katonah Museum of Art, about an hour's drive north of Manhattan in New York's Westchester County. Among artists included in the show are Li Wei, O Zhang, Zhang Xiao and Yu Haibo, whose pictures of a village that's home to artists who reproduce famous oil paintings won a 2006 World Press Photo award.

"This exhibition is not just about photography," Neil Watson, executive director of the museum, told China Daily. "It looks at the changing society of China. We thought it was a great teaching opportunity for us to be able to present this work in the US because there is such a global vision with these artists. You can see a lot of different styles of photography in the influences, and yet the photos are always distinctly Chinese."

Most of the photographers featured in the show still live in China, and have chosen to focus on the modernization of their country. Image subjects include materialism, modernization, the loss of ancient traditions, the wealth gap, a growing anxiety among China's aging population and the ambitious goals of its youth.

O Zhang's 2006 Daddy and I series features Chinese daughters adopted by American fathers. The photographs represent the US-China relationship, which will change as a daughter's relationship with her father will change, the artist has said in previous interviews.

"These artists are making comments about the confusion that's occurring in Chinese society, and how people are processing these changes that are happening so rapidly," said Miles Barth, curator of the exhibition. "They are reflecting their culture, in every way possible.

"I would say that 95 percent of the photographers featured here, and possibly in the field, are making some kind of statement. But on some level, the work is asking more questions than it is answering. I think they're saying, 'Look at us - we are going through a revolution, and we have no idea where we're headed.'"

He pointed to Weng Fen's Sitting on the Wall series, featuring young schoolgirls with their backs to the camera, looking out toward urban landscapes.

"He is showing both sides of the coin, both wonderment and fear at how quickly things are changing," he said. "Is it positive or negative? It's unclear." 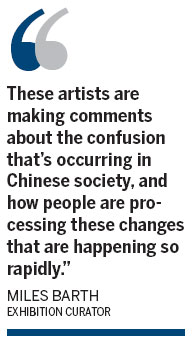 Nancy Wallach, director of curatorial affairs for the Katonah museum, believes the issues Chinese photographers are grappling with are universal.

"They are dealing with issues that are pertinent to China in a political, economic or cultural sense, but these are often also issues that people are facing all over the world," she said. "It is very much a part of a global conversation."

For example, Li Wei, whose images of gravity-defying stunt scenes have gained a following in the US, is dealing with modernization in a global sense, she said. His 2005 image A Pause for Humanity No 1 depicts the artist tied to the steel girder of a skyscraper, his wife and infant child beside him high above the city.

"His photos are about how dangerous it is to live in the contemporary world, with all these things happening and coming at you, and how it's difficult to get a grip on things," she said. "But at the same time, there's a sense that nothing is impossible. That could be applied to many parts of the world, in any area that is undergoing rapid building."

Li's photographs are staged with the help of ropes and wires that are later removed in Photoshop. Many of the photographs on display use further digital manipulation, a trend in photography worldwide, Wallach said.

In light of China's lack of exposure to Western art and technology before the 1990s, Chinese photography has progressed very quickly, Barth said.

"Given the circumstances of political and economic conditions that existed in China for so long, it is absolutely outstanding that they have come this far in such a short period of time," he said. "I hope that American audiences will take away that Chinese photographers are on par with other contemporary photographers from any part of the world, and they have overcome enormous stumbling blocks in terms of finding education, materials and outlets for their work. They are probably one of the most accomplished groups of contemporary photographers in the world, given the short amount of time that they have actually been recognized."

The advent of the Internet in China during the late 1990s pushed development in the arts forward, Wallach said.

"I think that these artists have so much to say because they haven't had the opportunity for that long," Watson said. "For a long time Chinese photographers and artists simply couldn't get their work out there. I think that they are very clever in how they get their message across; they veil their message in humor, theatricality and intelligence."

In a country as populous as China, it is incredibly difficult to be noticed as an artist, Barth said.

"So they push the boundaries," he said. "There are ways around anything, and it requires a certain kind of ingenuity in the ones that succeed. And even when you're out there on the Internet, you're competing with millions of other images. But in my experience, Chinese photographers work extremely hard and long at the projects in which they're involved. They are not casual about how they work; they are extremely aggressive, prolific and savvy as to how to produce photographs that can be exhibited."

The popularization of the Internet in China coincided with a period in which China itself was opening up, Barth said.

"The Chinese government realized that promoting art would be an important contribution to world culture," he said. "Photography was one of the integral and early ways that Chinese culture was exhibited to the rest of the world, and the Internet played a critical part in that."

China has now surpassed the US as the world's largest market for contemporary art, Wallach noted.

"What I feel is that China has jumped in with both feet, and they are fully a part of what's happening now," Watson said. "Chinese photography is not just a viable art form, but these are serious artists making interesting work. It has been truly eye-opening, to see what these artists have chosen to point their cameras at. I like the idea that they are simply interested in what is changing in China."