To celebrate the 20th anniversary of the first ThinkPad laptop computers, Lenovo added a pair of products to the line - the X1 Carbon, an ultra-light (less than 3 pounds) carbon-fiber machine with 14-inch display, and the ThinkPad Tablet 2, a 10.1-inch device that runs Microsoft Corp's new Windows 8 operating system.

The ThinkPad was introduced in 1992 by US-based International Business Machines Corp but became a Lenovo brand when the Chinese company bought IBM's PC business in 2005.

Despite a basic look and all-black color - ThinkPad designers deem this "sexy" - the X1 Carbon stands out because of the "quality experience" it provides users, Hill said.

"It stands out because it's not only thin and light, but it's durable. It has a high-quality-build feel to it and it has an incredible keyboard - typing matters."

These elements keep the brand strong, said Hill, who has led the ThinkPad design team for 17 years, first for IBM and now with Lenovo. 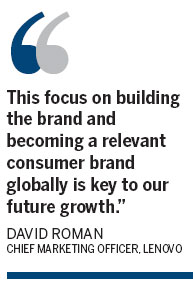 "In this industry, to have a brand that is as enduring as 20 years is a long time," he said. "It has established somewhat of a different position in the industry for its reliability, for the quality of engineering, for the excellence of design."

The X1 Carbon has third-generation wireless connectivity and features adapted from tablets and smartphones, said Dilip Bhatia, vice-president of the ThinkPad business unit for Lenovo. The Tablet 2, which weighs about 1 pound, 3 ounces (less than 600 grams), was an engineering collaboration of Lenovo, Microsoft and chip maker Intel Corp.

The X1 Carbon will be available for sale in the US on Aug 21 in four configurations ranging from $1,399 to $1,849. Lenovo hasn't yet disclosed a retail price for the ThinkPad Tablet 2, which will go on sale in October - the same month Microsoft rolls out Windows 8.

"For the next generation of Lenovo PCs, designed to be great with Windows 8, we're working closer than ever with Microsoft and our silicon partners," Bhatia said.

Retired NASA astronaut Rick Searfoss, who was a guest of Lenovo at Wednesday's launch, praised the reliability of the ThinkPad in "life and death" conditions during his career, which included piloting or commanding three US space shuttle missions in the 1990s.

"It's not only the elegance of the design, but the robustness of being able to just work in very difficult operational environments," he said. "They are clearly machines that are for serious users who have to get something done."

When Lenovo bought the IBM PC division seven years ago, the tech industry was abuzz with speculation over what the Beijing-based company might do with its $1.25 billion acquisition. The direct move into a high-profile US industry was highly unusual for a Chinese company, but Lenovo had a plan: Go global and do better. By 2008, the company had launched the ThinkPad X300 in 2008, its first new product after the IBM deal.

"There was a lot of concern at the time Lenovo took over that what had been a very strong brand and a very strong product would be weakened, and maybe would just disappear," said Steve Kleynhans, research vice-president at technology consulting firm Gartner Inc.

"However, to Lenovo's credit, it didn't happen. In fact, I would say the ThinkPad brand itself is actually stronger over the past seven years," said Kleynhans, who has been using ThinkPads since the '90s.

Today, Lenovo is the world's No 2 PC maker by shipments, behind only US-based Hewlett-Packard Co. It has $30 billion in annual sales, a presence in some 60 countries, a worldwide work force of 27,000 and offices in North Carolina that serve its North American customers. In China, the company enjoys more than a 30 percent share of the PC market while in the US it has about 8 percent.

Lenovo has shown it can catch up quickly to well-established consumer brands, said Roman, the marketing chief.

"The biggest challenge is simply keeping up with the pace," he said. "Right now as a company we've actually grown faster than our brand."

In Fortune magazine's latest list of the 500 biggest companies in the world, Lenovo ranks 370th, up from No 450 last year.

But the company doesn't have the brand recognition globally that it does in China, Roman said.

"So this focus on building the brand and becoming a relevant consumer brand globally is key to our future growth," he added.

On Aug 1, Lenovo announced a tie-up with Massachusetts-based data-storage provider EMC Corp to develop and sell servers and network storage. Lenovo will offer its customers EMC products while EMC features Lenovo-made servers in its lineup of products and services.

Roman called the collaboration an example of Lenovo's "PC-plus strategy" of expanding into the sale of networking equipment to business customers.

"Working together opens up new opportunities for both," he said.

Yu Wei in New York contributed to this story.