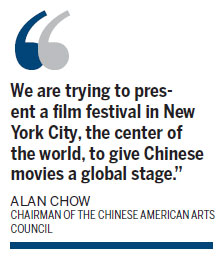 The so-called six generation director Zhang Yang has won numerous acclaim from filmmakers for his new movie Full Circle, which depicts life at an elderly's home.

The festival, which features 12 films and will run from Oct 18-20, is presented by China Central Television Movie Channel and the Chinese American Arts Council.

Jia Qi, deputy director of CCTV Movie Channel, and Sid Ganis, director of the American Association of Independent Film, are co-chairing the festival.

The featured films include Only Walk, Under The Influence, Echoes Of The Rainbow, Love for Life and After This Our Exile.

"The Chinese movie industry is booming," said Alan Chow, chairman of the Chinese American Arts Council. "However, Chinese films are not well known among Westerners. So we are trying to present a film festival in New York City, the center of the world, to give Chinese movies a global stage."

Chow said that it's the first time for the festival to be graced by so many stars.

According to Association of Film Commissioners International, China has the fastest growing film market in the world and is now the third largest film producer globally, after India and the United States. China's film industry produced over 500 films in 2009, compared to just 100 in 2002.

According to the film industry's main trade group at Motion Picture Association of America, China imported 20 US films in 2011. However, only a handful of Chinese films are exported to a wide audience overseas and few Chinese films have done well in big Western markets with the exception of Zhang Yimou's Hero and Ang Lee's Crouching Tiger, Hidden Dragon.

The festival will hold a closing ceremony on Oct 19 at the Starlight Roof of New York's Waldorf-Astoria Hotel, featuring a black tie gala dinner and an Asian artists awards ceremony.