Rock rolls on, with passion, in China

When 24-year-old trumpeter/singer Cui Jian took the stage at Beijing's Workers Stadium in May 1986, the televised performance of his now-legendary song Nothing to My Name sparked a homegrown rock movement in a country that barely recognized the genre.

"The world is changing," Cui sang that night, in another song. "It only longs to never change."

By that time, Western music had been seeping into China on store-bought cassettes and homemade mix tapes, brought by foreign students and travelers or purchased by new businessmen who ventured across the border. Michael Jackson, the Beatles, Madonna, Led Zeppelin - all rolled in on the same tide, their music suggesting rebellion and transformation.

But until Cui sang on that night 26 years ago, no Chinese voice had spoken so directly to a restless generation still searching for identity in the post-revolution era.

"If Western rock blew the minds of young Chinese in the early '80s, Cui's song twisted heads clear off bodies and drop-kicked them across time and space," writes Jonathan Campbell in his new book, Red Rock: The Long, Strange March of Chinese Rock & Roll.

"Western music was one thing, but with Nothing to My Name the lyrics were decipherable, not to mention completely sympathetic to so much of the nation's state of mind. Cui's groan carried the aches, tensions and restlessness of a lost generation."

In his lyrics, Cui spoke as an individual, using "I" when "we" had been the norm for as long as anyone could remember. He dressed like a normal person, presented himself as an average guy, Campbell notes.

Suddenly, exploring and even creating Western music was an option. An average Chinese teenager could buy a guitar, get together with a friend and make noise. Yaogun (the Chinese translation for rock 'n' roll) gained traction, and a music scene formed. It signaled that anything might be possible, a thought that during the "cultural revolution" (1966-76) had been unimaginable.

"Rock 'n' roll is saying, 'You can do whatever you want to do, and you are just as important as anyone else,'" Campbell told China Daily. "Countless people I spoke with would say that after they discovered rock, they saw everything in a new light. Before that, all people had heard was, 'You must get married, get a job, get a car, and that's it. Buy stuff.' Whereas rock is saying that you shouldn't forget that there's also art. There's you, as a person and an individual.

"Yaogun is more rock 'n' roll than rock 'n' roll, in my opinion. It's going to the roots of rock, because it's saying 'Do something. Anything.'"

In 2000, at age 25, Campbell moved to Beijing to study Chinese, and soon started drumming for a band. In his day job as a writer for a local events guide, he easily made connections and began promoting and touring with Chinese groups.

Over the next 10 years he built a network of friends and fellow participants who form the core of his book, for which he interviewed over 90 musicians and critics. Many are still playing in bands today, part of a scene that's increasingly mainstream but no less rock in nature, said Campbell, who is back to his native Canada.

"My mission in writing this book was to contextualize what's happening now. Chinese bands come through New York today, and it's not that weird.

"But 30 years ago, you couldn't even conceive of someone creating this music there. Whether they want to admit it or not, the youngest bands [in China] today are the product of this long march - and they're more of a product of those early Chinese bands of the '80s and '90s than your average Brooklyn band is a product of the Beatles." 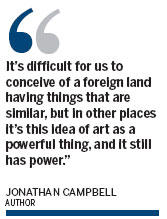 In the early days, musicians and fans alike were swept up in the sense of possibility that the music represented, he said. Zhang Fan, head of the Midi School of Music and its annual rock festival, both in Beijing, told Campbell that rock made him think about the future.

"I got moved to thinking about how things were getting better," Zhang said. "That young people were going to be the future. That things were good, the country is opening up. That we should contribute to the nation. It made me really happy, and to want to contribute."

At the time, fringe culture was still considered dangerous and disruptive. To participate in the rock scene was a life choice. In fact, many of those early rock musicians were classically trained players who broke away from their roots to explore new styles. Dai Qin, frontman for a band called Thin Man, had been a member of a government theater troupe.

In 1992, he was performing at a nightclub in the capital of Inner Mongolia, Hohhot, when he first heard the Beatles' Come Together.

"I cried," he told Campbell. "The hair on my arms stood up. It was crazy! I didn't know what to do with myself. This is what I'd always wanted to do, but I had no idea how to do it."

Part of what marked those years after China opened to the world was the sudden onslaught of cultural information, Campbell said. It was overwhelming and exciting for young musicians and fans.

Jennifer Conrad, a former music editor of Time Out Beijing who joined Campbell in a panel discussion about the book in Brooklyn earlier this month, spoke to China Daily about the compression of that musical education.

"The changes happened very quickly," she said. "Whereas in the West rock 'n' roll developed over several decades, in China people started from scratch and had to catch up very quickly. Musically, what took maybe five decades in the West happened in about two in China. That's true for other aspects in the country as well, where modernization and standard-of-living improvements have occurred at a breakneck pace.

"In a generation, a place can go from being a rural village to a teeming city."

Western audiences will be surprised by Red Rock, Conrad said. "Most of the stories coming out of China today are about the leaders or about the economy and environmental issues. But, say, if you live in Williamsburg or Greenpoint [two Brooklyn neighborhoods] what are your counterparts in Beijing doing?

"It turns out, they're making art and music, drinking cheap beer, listening to MGMT, but they're also often very patriotic, very involved with what's going on in the music scene there (not just following overseas developments), and newly confident about China's place in the world."

The Western expatriate community has, since the early days, contributed both musicians and an audience for China's rock scene, Campbell said. Westerners had the cash to afford albums and concert tickets, which for many Chinese were still out of reach at the beginning. They understood club and concert culture, and provided know-how when Chinese venues were still getting their feet wet.

There are pitfalls to being a Western observer to Chinese culture, he said.

"There is a feeling that it's a colonial impulse," he writes. "The smile that says 'Awww, isn't that just great! Chinese people interested in our music.' The smile that says, 'Sure, your album's not great, but you guys - and by 'you guys' I mean your People - are new at this and so it's pretty alright for a start."

But such condescension obscures the fact that for Western audiences, it has been decades since rock truly felt powerful, he said.

"It's difficult for us to conceive of a foreign land having things that are similar, but in other places it's this idea of art as a powerful thing, and it still has power," he said. "We say, 'Holy crap, they have Mohawks instead of Mao suits! That's crazy! But on the other hand, holy crap, it actually means something.

"It's our responsibility as writers to write about it in a way that's not patronizing, because they're not doing it to seem like us. They're making this music even today because they actually still understand what it means to do it."