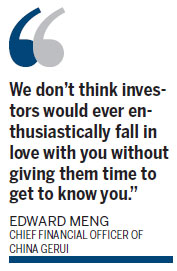 To Edward Meng, steelmaker China Gerui is "the right wagon".

"It's just a matter of how quickly this wagon can pick up speed," says Meng, CFO of the Zhengzhou, Henan province company. "When the market comes back, we'll be one of the first to take off."

Meng is on a drive to reassure investors that his company's strategy will see it through what China's steelmakers are facing: weak demand stemming from slower economic growth and falling prices tied to overcapacity.

He was in New York recently to give US investors a chance to get to know Gerui - formally known as China Gerui Advanced Materials Group Ltd - better at a recent public meeting at New York's Chrysler Building.

He used the conference in the offices of public relations firm Grayling USA to reassure investors that the company's strategy will see it through numerous challenges that have affected its financial results and share price on the Nasdaq, where it trades under the symbol "CHOP".

"The most difficult part is for the two to get to know each other - and to change, and to adapt, and to eventually build the lifelong bond," Meng said about his company and investors in a China Daily interview. "So that's something we're working on."

In the interview, on the heels of Meng's appearance at a high-profile industry symposium as a panel presenter, the CFO emphasized his belief that China Gerui's ability to churn out high-end, ultra-thin precision steel products differentiates it from its steel industry rivals, and will leave it poised to pick up sales when better times return to the industry.

"We are very strong, operation-wise. Our business is good," Meng said. "Give us another two to three years. If the market continues to be the way it is, I think we'll be OK at that point."

On top of weak demand, share prices of US-listed Chinese firms - as well as the prospects for new US initial offerings by Chinese companies - have been hurt by investors who have dumped shares amid scrutiny by US regulators and short-sellers. Continuing US allegations that China is dumping low-priced steel on the market to undercut US producers have further clouded the investment climate.

Meng said the company's stock price drop reflects the current state of "overall confidence of the US investors".

"We understand how the investor feels", he said, "but the stock is performing in line with most of the other Chinese companies in the US."

Meng said he expects the Chinese government's push for urbanization to bring a boom to the market for the products his company makes.

China is moving a quarter of a billion rural residents into newly built cities in an effort to boost domestic consumption and revive a slowing economy. The government's goal is to fully integrate 70 percent of the country's population, or roughly 900 million people, into city living by 2025.

Urbanization would bring "a tremendous investment in the real estate sector", Meng said. As houses are built for the migrants, he expects orders to pour in for China Gerui's steel for housing construction and decoration projects, food and beverage packaging, appliances and fiber optic cable.

That's why, in his view, China Gerui is well-positioned by focusing on a niche. "We're not a crude steel producer," Meng said. "We're a metal processing company. We're not a commodity crude steel processor. We're a higher end, high precision cold rolled steel producer. Eventually, when things come around, we'll have the correct market positioning, given our optimized product mix and our capability to meet customer requirements".

But the company, like its rivals, is contending with weak demand and falling prices amid slower economic growth.

China's GDP growth rate slowed to 7.7 percent in the first quarter from 7.9 percent in third-quarter 2012, according to the National Bureau of Statistics. For 2013, Citigroup now forecasts China's GDP growth falling to 7.6 percent this year, down from an earlier view of 7.8 percent, and sees GDP dropping even further next year, to 7.3 percent.

Nothing will power investors' love like a revival in the steel market, he said.

"We want to be patient," he said. "We are trying not to be like companies that look for money without giving investors time to know each other. We don't think investors would ever enthusiastically fall in love with you without giving them time to get to know you."

US presses Russia over Snowden case