Despite China's slowing economic growth, the retail industry in the world's second-largest economy will maintain sustainable growth in the medium and long term, commerce officials said on Thursday.

Meanwhile, the industry is undergoing a transformation and the government will make more efforts to enhance its quality and efficiency and to optimize its structure.

"Following the restructuring process of the economic growth model, the improvement of the consumption structure, the advancing urbanization, and especially the development of e-commerce, China's retail industry in the remainder of the 12th Five-Year Plan (2011-15) will keep steady growth," Wang Desheng, deputy director of the department of circulation industry development at the Ministry of Commerce, told a news conference on Thursday.

Guo Geping, president of the China Chain Store & Franchise Association, echoed that view and said that the country's retail industry will maintain "sustainable and rigid" growth in the medium and long term, driven by a huge market.

"The future development of the industry will focus on innovation, structural optimization and enhancements in quality and efficiency," Wang said. "The retail industry will see faster transformation and upgrading, including the integration of online and offline retail channels, mergers across regions and brand building."

China's retail sales increased 12.6 percent year-on-year from January to May, a pace slower than the 14.3 percent growth seen in 2012 or the 17.1 percent increase in 2011, according to the ministry.

Meanwhile, the new leadership of the world's second-largest economy vowed to shift economic growth from the export- and investment-driven model to a consumption-supported one, which is more sustainable, and is showing more tolerance for the economic slowdown. China's GDP growth eased to 7.7 percent in the first quarter of the year from 7.9 percent in the last quarter of 2012.

"Consumption is a key but difficult area for China to expand domestic demand and retains the greatest potential for China's sustainable economic development," Yao Jian, spokesman for the ministry, told the conference. "The ministry will expand commodity consumption during the integration of rural and urban areas, while boosting the upgrading and innovation of consumer products. What's more, consumption of services, especially in medium-sized and large cities, will be a key point for enlarging consumption in the near future."

China's consumption expenditure accounted for a low percentage of the GDP compared with the average level in developed economies, while the 14.3 percent growth of retail sales in 2012 suggested a "very challenging" prospect for retail sales in the coming two years, according to a report released by the ministry on Thursday.

"In line with the drive to restructure the economic growth model and expand household consumption, we must speed up the establishment of a suitable modern retail network and significantly enhance the contribution of consumption to GDP growth," the report said.

Wang from the ministry added that the retail industry faces some outstanding challenges, including unbalanced retail networks in rural and urban areas, fast rising operational costs, obsolete operation models as well as insufficient services for logistics, online payment and financing.

"Costs increased fast for the retail industry in recent years and rents and wages are the major contributors," Guo from the association said. 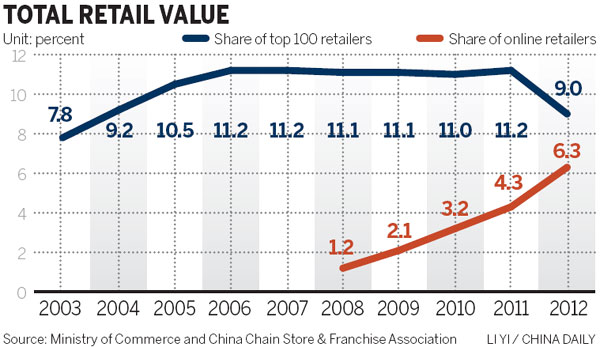