Chinese Films in the US: Not a full house

Walk through the lobby of AMC Atlantic Times Square Theater in Los Angeles on a Friday night and you may wonder whether you are in China.

Huge posters of Chinese movies are on the walls and at least one of its 14 theaters is full of young Chinese adults watching Chinese movies recently released on the big screen in China, such as The Rooftop, Tiny Times, Drug War and The Grandmaster.

"This situation is hard to be imagined even three years ago," said Robert Lundberg, vice-president of China Lion Entertainment, a leading Chinese film distributor in the US. "There were only two or three Chinese movies released a year in certain locations three years ago. But now, there is always at least one Chinese-language film in theaters."

Ironically, that audience is one of the major challenges facing movies made in China: There aren't Westerners there and it's causing box-office receipts to suffer. 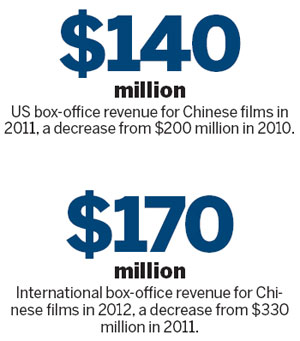 "The audience was very different dating back to the '90s from today's Chinese movies," said Stanley Rosen, professor of political science at the University of Southern California. "Most of the audience for the films such as Crouching Tiger, Hidden Dragon were Americans, but for the movies today, very few Westerners go to see them. The main audiences of today's Chinese films are Chinese in the US, mainly Chinese students. The market for Chinese films became very limited outside the Chinese community. The Chinese films today are played only in a very limited number of theaters and last for a very short time."

Chinese films were very successful in the US market in the past, with many high on the box-office tally for foreign-language films. Crouching Tiger, Hidden Dragon was at the top. Its box-office take was $128 million, twice as much as the box office for the Italian film Life is Beautiful, which ranked second. Hero ranked third, with a box office of nearly $54 million.

But the golden time for made-in-China movies has passed. The most successful film last year was Back to 1942. With a box office of around $313,000, it ranked 608 on the box-office receipt total for foreign-language films in the US.

"Zhang Yimou's movies back to the 1990s had $2 million box office in the US. The most recent Zhang Yimou films didn't do anything near that well," said Rosen.

"The genre of Chinese film being distributed in the US has also changed. The most successful Chinese films in the US market before 2006 were action movies or martial arts movies, and dramas directed by famous directors such as Ang Lee, Zhang Yimou, Chen Kaige and Wong Kar-wai. On the 2012 list of the most successfully distributed Chinese films in the US, the number of action movies or martial arts movies declined and romantic comedies increased."

In terms of distributors, Chinese films in the 1990s or the beginning of the 21st century were distributed by major US companies. Sony, the number six distributor in the US, put out Crouching Tiger, Hidden Dragon; and the Miramax-distributed Hero.

Lundberg said distributors now have a more focused business model. He said China Lion's target audience is in big cities between the ages of 18 and 34, born in the Chinese mainland, Hong Kong or Taiwan, and who can speak Mandarin.

He said China Lion picks movies according to the taste of its target audiences. Therefore, they tend to distribute more romantic comedies and dramas that are popular in the Chinese market, and they only distribute the films in theaters in big cities' where there is a Chinatown.

Well Go Entertainment, another key player in Chinese film distribution in the US, said Chinese-language films accounted for 65 percent of all films it distributed.

"Foreign comedies don't translate very well," said Jason Pfardrescher, vice-president of Well Go. They will translate to Chinese audiences but only to Chinese audiences, he said. "I know there were really great Chinese comedies, but we decided to take them out because for business reasons it does not make sense to release in North America."

Rosen said there is a cultural difference, with Chinese comedies always telling Chinese stories that are made for Chinese audiences. "Unless you are from China, you'll not find it particularly interesting," he said. "It's very hard to get Westerners interested in the stories or even understand the stories."

Like Chinese foreign-language comedies, Chinese foreign-language dramas also have not done well in the US market. Lundberg cited A Simple Life, a Chinese drama released by China Lion last year. "It was among the top 10 films of the year rated by a well-known American movie critic, Roger Ebert. But the American audience did not even know the film existed," he said. The film's box office was $191, 826 and ranked seventh among all Chinese films distributed in the US in 2012.

"Action movies tend to be more successful than other genres," Pfardrescher said. "There's no secret that Well Go focuses on action movies and martial arts movies."

Since 1980, the Chinese movies that had a box office over $10 million were all action movies. "When watching Crouching Tiger, Hidden Dragon, many people did not even realize that was in subtitle because they were watching the action," Rosen explained.

"The time of Crouching Tiger, Hidden Dragon is gone. Now martial arts films are hard to be that successful. Foreign-language films have not done very well in the US since 2006. It's not only for Chinese films, but for all foreign language films," he said.

Xi calls for a push in innovation in Dalian