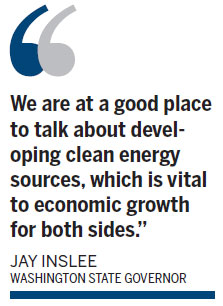 In a move to vie for more cooperation in business and Chinese investments, Washington State Governor Jay Inslee will have his first trade mission to China in November.

"China's economic growth has tremendous potential for the State of Washington to sell more products to market, from Starbucks coffee and premier wine to computer software," Inslee said. "I am looking for things that can be mutually beneficial."

He said what has been going on in China in the last couple of decades is "truly historic and that represents potentially really great news for my state", because people in China have improved their living standard and they are purchasing products from Washington.

China is Washington's largest export market.Washington exported a record $14.2 billion worth of goods to China last year, making Washington the number one exporter to China of all US states, even eclipsing California.

The state is also a major exporter of services such as software development, architecture, engineering and education. It has an overseas office in Shanghaithatserves as a point of contact for Chinese investors to inquireabout Washington.

Every year since 2006, China has beenWashington's largest market for aerospace exports, which reachednearly $4 billion in 2011.

With an increasing number of US states and cities vying for investment from China in recent years, Inslee said Washington State will highlight its strengths with China in the fields of "high-tech", "wine" and especially "clean energy".

"We are at a good place to talk about developing clean energy sources, which is vital to economic growth for both sides," he said.

"I know there is big concern in China to control air quality," he said. "For our state, we have been suffering the early impact of climate changes.

"Both sides recognize the importance to develop clean energy and new transportation system," he added.

The governor said that Beijing and Shanghai were on the itinerary for his November trip, while other stops are still in the planning stage. Sources close to the delegation group told China Daily that Shenzhen and Chengdu are also being considered.

As a warm up for the official visit, Insleewill attend the 2013 Seattle Biz-Tech Summit on Oct 19, which will attract some 150 Chinese entrepreneurs looking for collaboration opportunities in Washington.

Spencer Cohen, senior policy advisor at the Washington Economic Development Commission, said the State Department of Commercehas worked with the Washington Bar Association to update and translate into Chinese thecomprehensive"Guide toDoing Business in Washington" to distribute to interested Chinese nationals.

"TheStateDepartment of Commercehas updatedand translated into simplified Chineseindustry factsheets, to help inform Chinese nationals of the benefits to doing business in Washington," he said.

Each year, the state meets with various in-bound delegations from China, he said.

In 2010, ex-governor Christine Gregoire led her second trademission to China,whichincluded a group of smart grid industry representatives. As part of the mission, a roundtable meeting was held to discuss ways to collaborate in the smart grid space and other clean technology opportunities.

"We are always excited when a delegation goes to China and when China events take place here in the Greater Seattle area," Sam Kaplan, the president of Trade Development Alliance in Seattle Region, told China Daily.

For example, the Chinese cargo ship Liulinhai, the first Chinese vessel to call at a US port in 30 years, came to Seattle in 1979, he said.

"Microsoft has been in China since 1990. Boeing airplanes fly in China, Starbucks coffee is served there, Brown and Haley Almond Roca candy, Washington apples are eaten there. Both China and Washington state have prospered because of each other," he added.

Fed's taper is a key issue for G20