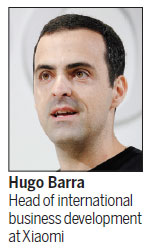 Chinese smartphone maker Xiaomi Corp announced the hiring a top executive from Google Inc on Thursday in a bid to boost its overseas business. The news reflects an emerging trend that global firms are making efforts to hire international talent for their senior management positions, said industry experts.

Hugo Barra, Google's former vice-president of product management for the company's Android operating system, will join Xiaomi in October as head of international business development, wrote Lei Jun, founder and chief executive officer of the Beijing-based Xiaomi, on his Sina Weibo - a popular microblog in China.

"Barra's entry into Xiaomi signals the speeding up of the company's globalization drive. Xiaomi started to tap the market outside the Chinese mainland by launching mobile phones in Hong Kong and Taiwan in April. It's likely that Xiaomi will expand to other overseas markets after Barra joins the team," the Chinese company said in a statement.

Benjamin Zhai, head of the China desk at Russell Reynolds Associates, a leading executive search and assessment firm in New York, said Xiaomi's move shows the company is joining the "beginning of an emerging trend" in global executive hiring.

"Since IT and communications industries are taking off in China, Barra's move to a Chinese firm makes perfect sense," said Zhai.

Chinese executives have also been more involved in foreign firms. Lu Qi, who has been running Microsoft's web-search engine Bing, is said to be one of the potential candidates to lead the company when Steve Ballmer, the current CEO, retires within the next 12 months.

Xiaomi, which is backed by investors including Temasek Holdings Pte and Qiming Venture Partners, said earlier this month that it had completed its fourth round of funding, giving it a valuation of $10 billion.

The latest round of funding has also made Xiaomi, which sells its phones directly through its website, the fourth-largest Internet company in China, behind e-commerce giant Alibaba, service portal provider Tencent, and search giant Baidu - a notable achievement given the fact that Xiaomi released its first phone in 2011.

Barra, who joined Google in March 2008, said on his Google+ Web page that he will join the Xiaomi team in China to help the company expand its product portfolios and business globally.

"I'm really looking forward to this new challenge, and I'm particularly excited about the opportunity to continue to help drive the Android system," he said.

Google also confirmed that Barra has left. "We wish Hugo Barra the best," the company said in a statement. "We'll miss him at Google and we're excited that he is staying within the Android ecosystem."

Xiaomi didn't reveal which overseas markets will be the focus of its globalization drive, but James Yan, an analyst at International Data Corp, a global market intelligence firm, said that the company may first expand to markets in Southeast Asia later this year and then tap the European and US markets early next year.

"Although the Chinese mobile phone market is huge, it's still crucial for companies to expand to other markets if they want to be stronger and bigger," said Yan.

Shen Jingting contributed to this story.