Renminbi moves into the top 10 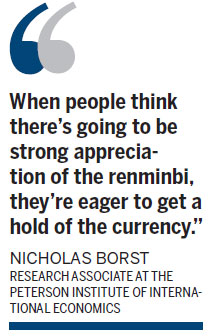 When a currency gets hot, people rush to get a hold of it: expert

For the first time, the Chinese renminbi has become one of the top 10 most-traded currencies and its climb has been due to growth in offshore trading, according to a survey by the Bank for International Settlements.

The renminbi was the 9th most-actively traded currency this year in BIS's latest survey, jumping from 17th in 2010 and 20th in 2007. The currency accounted for a 2.2 percent share of global foreign-exchange volumes, according to the report.

It placed just above the New Zealand dollar and the renminbi's entrance into the top 10 pushed the Hong Kong dollar and Swedish krona to spots 13 and 11, respectively. The US dollar continues to be the dominant global currency, accounting for 87 percent of global-trading volumes, increasing 2 percentage points since 2010. The US dollar is followed by the euro at 33.4 percent and the yen at 23 percent of global-trading volumes.

The BIS survey done in April reported that the renminbi "saw the most significant rise in market share among major emerging market currencies," with the currency's turnover increasing from $34 billion to $120 billion.

"The role of the renminbi in global FX trading surged, in line with increased efforts to internationalize the Chinese currency," said the BIS, which sees an average of $5.3 trillion in daily global currencies trading.

The ability to settle cross-border trade transactions with the renminbi is leading to tremendous growth in just a few years since the People's Bank of China and the State Administration of Foreign Exchange first allowed renminbi trade settlements.