In a sharp reversal from a June sell-off, China boosted its holdings of US Treasury securities by $1.5 billion in July to retain its lead as the United States' largest foreign creditor, the US Treasury said.

Japan, moving to keep the yen weak, was the biggest buyer of Treasuries for the month, taking $52 billion after a four-month selloff, and continued to trail China with $1.135 trillion in overall Treasury holdings, according to Treasury data released Tuesday. China's Treasury holdings for the latest month rose to $1.277 trillion, turning around a $21.5 billion drop in June.

Overall foreign holdings of Treasuries rose by $31.1 billion in July amid what analysts said was a general easing of market anxiety over the Federal Reserve's plan to wind down its monetary stimulus, blamed for a $67 billion plunge in foreign holdings of long-debt in June. Some analysts expect the Fed to announce its first reduction in its $85-billion-a-month bond-buying program when it concludes a policy meeting today.

"The market is calmer now, but hopefully it is not the calm before the storm," said John Praveen, chief investment strategist at Prudential International Investments Advisers LLC in New Jersey.

He said that the Fed will "probably start tapering" on Wednesday. "But I think they have sent a signal that the tapering will be at a very gradual and measured pace, so as not to bring about dislocations in the market. I think the anxiety is probably behind us." 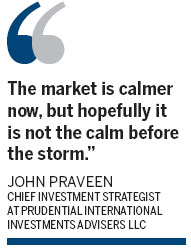 Praveen said China's moves to decrease buying Treasuries is in line with efforts to restructure its economy into consumption-driven rather than driven by investments and exports.

"Their policy is more in terms of trying to bring about a shift toward a domestic driven economy which means their exports will continue to grow but not at the same pace as in the past, so they probably don't need to use their reserves to buy more Treasuries," Praveen said.

Gennadiy Goldberg, a US strategist at TD Securities, told Reuters that the overall buying surge was surprising given the worry that had hovered over the debt market. The anxiety drove yields, which move inversely to price, on benchmark 10-year Treasuries up nearly half a percentage point that month and led to a record $40.8 bilion net Treasury debt outflow. Investors kept unloading Treasuries in August and into September, at one point driving the 10-year yield to a two-year high above 3 percent. It stood at 2.85 percent on Tuesday.