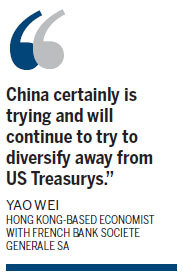 China, the United States' biggest foreign creditor, modestly increased its holdings of US Treasury securities to $1.17 trillion in November, up $200 million from the previous month, the Treasury Department disclosed on Wednesday.

According to the department's monthly Treasury International Capital report, November experienced a rebound in foreign demand in US bonds, despite concerns over unresolved fiscal-policy debates in Washington.

Foreign investors bought a net total of $26.4 billion of Treasury notes and bonds during the month, more than double the $12 billion in net purchases recorded for October.

China's holdings of US Treasurys shrank from the $1.25 trillion high reached in November 2011, continuing a pattern of decline through much of last year.

"China certainly is trying and will continue to try to diversify away from US Treasurys," Yao said.

"However, there are two stages of diversification: first flow and then stock. In terms of flow, we should check the share of US Treasurys in total foreign-exchange reserves. Based on that, the trend of flow diversification started in mid-2010 and has continued ever since."

Lou Jiwei, chairman and CEO of China Investment Corp, the country's sovereign wealth fund, said that while China will continue to buy US government debt, the return on its investment doesn't look promising. "It is a very difficult decision," he said.

Lou, a former Chinese vice-minister of finance, manages CIC's $410 billion in assets. He said US Treasurys are "still a safe asset right now, but you have to pay a big price to buy such safe assets", referring to continued low interest rates in the US.

"If you don't buy them, your risk-aversion capability will be affected, but if you do, then the returns won't be very good," Lou said at the Asian Financial Forum in Hong Kong this week.

Japan, which is second to China in the amount of US debt held, increased its total by $900 million, to $1.133 trillion, in November, according to the TIC report.

Japan increased its US Treasury holdings by $66 billion during the past 12 months while China's total shrank by $85 billion, helping narrow the gap between the two leading US creditors.

Analysts have predicted that Japan will continue increasing its US debt holdings this year as a way to weaken the yen currency, thus making Japanese exports cheaper and boosting the economy.

Other heavy buyers of Treasurys were Britain and Caribbean countries, which increased their holdings by $11.8 billion, to $145 billion, and by $10.2 billion, to $283.7 billion, respectively. Both are banking hubs that carry out frequent transactions on behalf of other foreign investors.