Despite ups and downs, diplomat remains optimistic on all fronts

When John Negroponte, former US deputy secretary of State, worked on the team that helped establish diplomatic relations with China in 1979, he and some of his colleagues wondered where the relationship would go.

"I remember we were debating in the State Department - we asked ourselves, 'What we were going to import from China'," recalled Negroponte, who served in Foreign Service at the time. "Can you imagine anybody asking such a question today, where we import so many different things?"

The 74-year-old British-born American diplomat first visited China in 1972 with Henry Kissinger, the former secretary of state who flew to Beijing on secret diplomatic missions prior to relations being formally established between the US and China.

The Kissinger aide remembered China differently from what it is today.

"Life was difficult in China; the country has come through many years of struggle and difficulty," said Negroponte in an interview with China Daily.

"What has been accomplished in China is very impressive," said Negroponte, who now is vice-chairman of Washington-based McLarty Associates, a strategic advisory firm.

"I am sure there will be some ups and downs; I know there are questions about balance between exports on the one hand and domestic consumption on the other, (and) these are policy issues that the leadership in China will have to deal with," he said.

Despite challenges facing the world's second-largest economy, the career diplomat said he is "optimistic" about the country and its future.

Chinese investment in the US has made big strides in recent years. It hit double digit figures for the first time this year, amounting to $12.2 billion, according to New York-based research firm Rhodium Group. The largest Chinese acquisition in the US to date was the $7.1 billion purchase in September by meat producer Shuanghui of Virginia-based pork producer Smithfield.

When Negroponte spoke last week at the Buttonwood Gathering conference in New York on potential threats the US is facing, he specifically listed China as an "opportunity" and not a threat, as some Western experts have labeled China.

"If you talk about a threat, you might make it a self-fulfilling prophecy," he said. "I think we need to think the relationship with China as a possibility, we need to conduct a relationship constructively and where we have problems we need to discuss them very candidly."

Negroponte cited areas that the world's top two economic superpowers can and must cooperate on for the benefit of not only themselves, but also the rest of the world, including climate change.

"We will never solve the problem of global warming unless three important countries in the world come to an understanding - China, the US and India," he said.

"There are many reasons why we have to cooperate with China and do our best to put the relationship on a constructive footing." 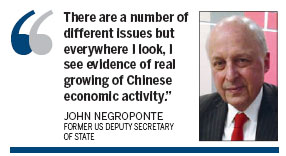 Merkel says US ties must not be put at risk