Citing disregard for the feelings of those afflicted

The Flying Tigers are the best example to show how Chinese and Americans joined hands in World War II to fight the Japanese aggressors on Chinese soil.

The group of volunteer pilots from the US Navy, Army and Marine Corps was set up in 1941 and fought many bloody battles against the Japanese to help achieve the ultimate victory in 1945 of China's war of resistance against Japanese aggression.

After Japanese Prime Minister Shinzo Abe on Dec 26 visited the controversial Yasukuni Shrine where 14 Class-A war criminals are honored, the Flying Tigers are getting as angry as Chinese and Koreans.

In a letter to Cui Tiankai, Chinese ambassador to the US, the Flying Tiger Historical Organization said it shared the US government's disappointment in Abe's "disregard for the feelings of those people who were so brutally impacted by the Japanese military during WWII".

"Visiting the shrine which honors Japanese war criminals could only further open the wounds left by WWII," said Major General James Whitehead Jr, chairman of the board of the organization.

He said the US along with many other nations cautioned against and condemned the visit and it is the stated goal of the organization to promote continued friendship, cultural understanding and cooperation between peoples.

"This visit by Prime Minister Abe can do nothing toward healing the deep wounds left by WWII and to promote world peace, understanding and harmony," Whitehead said.

He said the organization is dedicated to preserving the shared history, sacrifices and heroics between American and Chinese people during WWII.

Chennault, who founded the Flying Tigers and was its commander, is among the most popular Americans in China and known mostly by his Chinese name, Chen Nade. 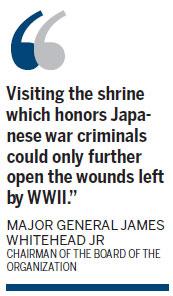 In the Arlington National Cemetery outside Washington DC, Chinese visitors would often pay respect to the tomb of Chennault, located in section two just under the hill of the Arlington House.

While the Chinese have a fond memory of the Flying Tigers, many of whom sacrificed their young lives in China, Americans have not forgotten them either.

On Monday, General Chennault's granddaughter Nell Calloway, a few tourists and the nephew of a Marine mechanic who worked on Curtiss P-40s fighters during WWII, applauded as a crane safely eased the fuselage of the shark-nosed fighter plane representing the famed Flying Tigers into the National WWII Museum in New Orleans, Louisiana, according to an Associated Press report.

"Ain't that pretty?" Calloway, Chennault's granddaughter and director of the Chennault Aviation and Military Museum in Monroe, Louisiana, asked, a catch in her voice, as the aircraft sat on a flatbed earlier, according to the AP.

The letter by the California-based Flying Tiger Historical Organization is just one of the latest protests against Abe's visit to Yasukuni Shrine. Both the US and Russian government leaders have criticized the visit. Germany has called on Japan to face up to its past history.

Abe's visit has also drawn sharp criticism from Japan's own citizens. A poll by the Asahi Shimbun on Jan 28 showed that 46 percent of voters opposed Abe's visit, while 41 percent said they have no problem with the visit.

Fifty-one percent of the respondents said Abe should take the criticism seriously while 40 percent said it is no big deal, according to the nationwide phone survey conducted on Jan 25-26.