Governmental officials, members of the Houston Consul Corps and community leaders attended the opening ceremony of US China Partnerships (UCP), a non-profit organization dedicated to creating new ties and strengthening existing ties between Houston and China.

The event was hosted by Houston Mayor Annise Parker Wednesday night at Julia Ideson Library and underwritten by Air China.

UCP was the brainchild of Fan Bo, an investment businessman who once worked at the foreign investment department of China's Ministry of Commerce and currently serves on the international trade and development council of Houston Mayor's Office.

Fan said he had worked in Japan and South Africa with the ministry and learned firsthand what it takes to do international business.

Fan said he had seen a lot of delegations from China come to Houston, but often times either nothing happened or the delegations gained little from their visits.

"A lot of them don't come back, and I think it's due to ineffective communications. They didn't know who to talk to. We need a platform and bridge to lead them to the right people to talk to," Fan said.

The idea for UCP came to Fan in 2012 during a trip to China with a delegation of city officials. "I talked about it and got a lot of encouragement from the leaders of the business community and city government," he said, and now, two years later, UCP has been born with Fan serving as its first president.

UCP's mission is to serve as a platform for sustained and substantive exchanges between the US and China, and hopes to facilitate two-way, high-level dialogues, organize cultural events and educational seminars, and identify opportunities to create professional exchanges or sustain existing exchanges.

UCP will also promote energy and public health cooperation between the US and China. 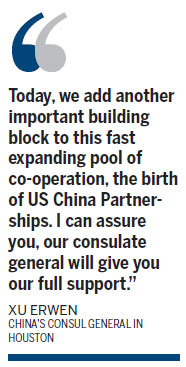 Speaking about the formation of UCP, Foster told a story of a group of Houston business leaders talking about the G7 recently, when one of them said, "No, it's not the G7 anymore, it's the G2 - what matters is what's happening in China and the United States."

Foster said that China is driving the world economy and that's why this partnership was being established - to strengthen the bilateral ties.

Mayor Parker pointed out that "Mexico is clearly our largest trade partner, they are our neighbors, but when you look at what's happening globally, China is absolutely critical and our relationship with China will do nothing but grow".

Parker's first international trade mission after taking office in 2010 was a visit to China.

Parker emphasized that UCP was not created to supplant any existing organization. "While the city government, the Houston Greater Partnership and other existing organizations focus on leadership and the common interests of Houston and China, often they can't provide longevity to that relationship. We need a platform that will be permanent - regardless of changes in city leadership and consul corps - so the relationship endures," Parker said.

According to Chinese Consul General in Houston Xu Erwen, close to 900 Houston companies have business and trade ties with China, and more than 550 firms in the greater Houston area have set up 3,000 subsidiaries in China.

"Today, we add another important building block to this fast expanding pool of co-operation, the birth of US China Partnerships," Xu told the gathering. "I can assure you, our consulate general will give you our full support."

Chi Zhihang, Air China vice-president and general manager for North America, made a special trip to Houston from LA for the event. Chi, who has been invited to join the UCP board, said that UCP's mission "is a position that Air China will support and facilitate. In the past year, I made so many trips to Houston that I feel right at home here".

Scholars from and on China

Baidu gets 'buy' rating from street