Successful businessman gives back to the community 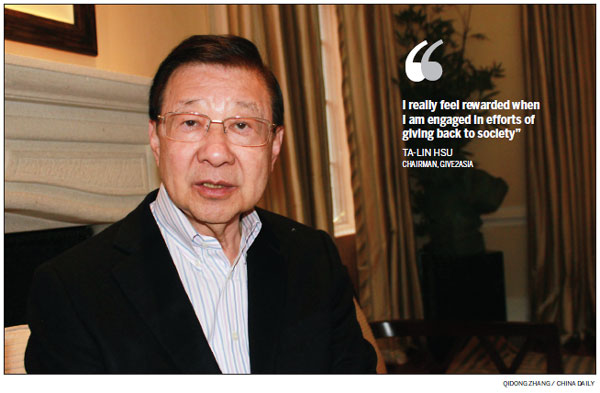 In 1986, after working 12 years at US-based IBM in advanced research of mass storage systems and technology, Ta-lin Hsu quit.

Many people "dropped glasses to the floor," when he quit the "golden bowl", Hsu said. But it may have been one of his most important - and fortuitous - decisions.

The holder of a bachelor's degree in physics, a master's degree in electro physics and a doctorate in electrical engineering, didn't turn to science or engineering. He went into venture capitalism and formed H&QAP.

"When I witnessed the venture capitalism model practiced in Silicon Valley, I thought it'd be a great model to bring to Taiwan and Asia. I then became one of the earliest people who brought the venture capital idea to Asia," Hsu said. "It was so new at that moment that I remember my mom kept asking me, 'Do you have a salary? How can you live without a salary?'"

H&QAP manages more than $2.7 billion in capital and has invested in more than 400 companies. Its Asia-Pacific division is recognized as a pioneer in Asian venture capital and private equity, bringing "Silicon Valley" style venture capital first to Taiwan, the Philippines, Malaysia, Indonesia and Thailand, and later to China in 1993, jointly managed with the Bank of China.

Named one of the top financiers in Asia's Business Week's "Stars of Asia' in 2007, and ranked as the 15th top venture capitalist by Forbes Midas List that same year, Hsu said he now finds his most rewarding task is giving back to society.

"I really feel rewarded when I am engaged in efforts of giving back to society," said Hsu. "Many Chinese come to America, live in good neighborhood, send kids to private school, and absorb the best resource from this country and society. What we need to think more about is giving back to society and participating in the progress of the society."

That effort is reflected his 30-year-plus devotion to local Chinese community services.

Hsu is the founder of Give2Asia, a US-based social enterprise that has served as a catalyst for philanthropic investment in Asia since 2001. The organization made $12 million in grants to China in 2013, 41 percent of its total grants for the year.

The San Francisco-based foundation has raised a total of $237 million in gifts and donations from 15,000 corporations, foundations, and individual donors, supporting projects of 1,500 community partners in 24 Asian countries since being founded.

"The world is changing so quickly. Twenty years ago Asia was there to receive aid. Today, the economic miracle in China and Asia might mean giving from Asia," said Hsu. "The most important part is that we help each other to live in a world without disease, poverty and hunger. We need to make a difference to the world and do whatever we can to help out."

When the Wenchuan earthquake occurred in Sichuan province on May 12, 2008, more than 87,000 people were killed, including thousands of students; 5.5 million were left homeless and forced to live in temporary communities.

Give2Asia was part of the rescue effort. The organization raised $16.6 million within 24 months from partners and donors and $15.9 million was granted to China.

On Feb 14, the organization announced a partnership with the China Social Entrepreneur Foundation, also known as YouChange, to set up the YouChange-Give2Asia Special Fund in China.

"Setting up the YouChange-Give2Asia Special Fund in China is an important step for Give2Asia and for the services we provide in the region. It enables us to directly work with clients in China to support philanthropic programs and organizations," said Hsu. "We are also able to provide advisory services and first-class stewardship for clients in China to help them deliver effective and excellent philanthropic programs."

The special fund will provide Give2Asia a platform for raising funds and managing local giving programs for international corporate donors in China who wish to engage their local offices and employees in China in tax-deductible giving that supports Chinese organizations and philanthropic programs. The new partnership will allow Give2Asia to further support social innovations and solutions that address local community needs.

According to Wang Ping, chairperson of the YouChange Foundation board, working with Give2Asia "brings to YouChange a new platform for international cooperation that improves and promotes charitable giving in Asia and in the United States".

Hsu's most important leadership roles are serving as the founding member of the Monte Jade Science & Technology organization, the premier non-profit that promotes business and relations, as a member of the Committee of 100 and representing H&Q Asia Pacific at the World Economic Forum in Davos, Switzerland.

"California Congressman Mike Honda, Congresswoman Judy Chu, for instance, were fully supported by an organization that me and my friends founded together named Asian American for Good Government (AAGG)," he said. "Mike was a middle school teacher before he ran for public office and is a typical success of what can be done when good local support is given."

Another organization that Hsu co-founded with friends in 1998 is "Vision New America," which initiated the Youth Leadership & Civic Engagement (YLCE) program that has supported hundreds of students in youth empowerment, leadership and civic engagement.

Defining himself as "a scientist at heart," Hsu grew up in Taiwan and received his bachelor's degree in physics from National Taiwan University. After getting his master's degree in electro physics from the Polytechnic Institute of Brooklyn and a doctorate in electrical engineering at Berkeley in 1966, he then joined IBM.

"While the earliest known Chinese Americans became notable scholars in Americans universities, such as Chang-lin Tien - chancellor of the University of California, Berkeley, 1990-1997, and the first Asian to head a major U.S university - and Shiing-Shen Chern - regarded as one of the leading mathematicians of the 20th century - the most notable careers in 1970s were working for large corporations such as Bell Lab, IBM, Phillips, Intel or Hewlett Packard research," Hsu said.

"Later, in the1980s and 1990s, the trend was to join smaller companies where you practice 'one kick for all tasks' to possibly start up your own company. Now the fashion is to start your company when you are in college, some kids even start up in high school."

Hsu, who lives in the Atherton area of San Francisco Bay, attributes Silicon Valley's success to its innovation and global high-tech talents.

"Many times people 'predict' that Silicon Valley would not sustain its legend, but several decades have passed, it is still 'holding ox ear' after the dot com crash and financial crisis. Probably it's because we have high-tech talents from China, India, Russia, Europe, Korea and many other countries, nowhere in the world is there such a global influence and resources like here. Most of all, nobody looks down on failure, everyone dares to think outside the box, and everybody dares to try new things," he said.

Having witnessed Chinese companies recently coming to Silicon Valley to start up research and development centers, Hsu is optimistic about the future.

"We will see results in 10 to 20 years from now that the innovation spirit will be spread all over China, and more talents will come across borders, which will further develop Silicon Valley into a global innovation center," said Hsu.

It was Microsoft Corp founder Bill Gates who inspired Hsu when he announced in 2004 that he would donate a large portion of his wealth to charity.

"I was really inspired by him, and touched by the social effort that followed afterwards when many wealthy people took him as role model and donated personal wealth to charity," Hsu said.

"What I also noticed was that Bill manages his charity utilizing a corporate management method to ensure the benefit of giving back to the society. And I would like Give2Asia to follow that example."

China's manufacturing picks up in April

Xbox One may see buying rush in China