China's business schools are brainstorming for ideas to lure Chinese entrepreneurs into their classrooms.

"Almost 70-80 percent of our students, CEO or senior executives in China's private businesses, said they are not interested in degree study when they come to business school," Seana Wang, dean of the overseas education college under the Shanghai Jiao Tong University, told China Daily.

The university sponsored a 10-day tour of the US for 66 Chinese CEOs and business executives that included visits to Washington, Philadelphia and San Francisco that ended on April 20.

The tour included meetings with key international financial institutions and US government officials, and it is part of a one-year non-degree course at the university. A short term in the UK will be scheduled in the later half of this year.

Those on the tour were from various industries, including real estate, manufacturing, mechanical equipment, energy, agriculture and food, logistics, electronic products and bilateral trading.

"Classical case study under the traditional business school model is lame. Many of the CEOs have already been successful businessmen who are creating unprecedented cases," he said.

In the past, Chinese private entrepreneurs only needed to be concerned about a company's internal problems like cost control, human resources management and domestic market expanding, Wang said.

"Today, one-third of our students have established their overseas branches. Overseas learning will broaden their horizons when they look for opportunities of IPO, overseas market acquisition and expansion," he said.

Commenting on the tour by the CEOs that he oversaw, Wang said: "We arranged for them to talk with policy makers on the East Coast and to communicate with innovative leaders from Google and Tesla on the West Coast. International vision is necessary for them because they are facing the already slowing GDP in China." 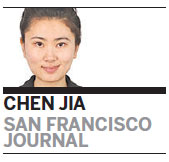 One executive, who refused to be named, told China Daily that he had considered a possible acquisition of a new energy project in Philadelphia valued as much as $1.6 billion.

Jiang Zhaobai, chairman of Shanghai Pengxin Group, and the class leader of the CEOs and business executives on the US tour, said his overseas investment covers the mining industry, agriculture and food. In China, his company's focuses are real estate and infrastructure construction.

He said participating in such an overseas management-training program is a good platform to build connections with "key people in the US".

In recent years, Chinese investors have been putting their money into diversified fields in the US, and before making those investment decisions, they need to better know the US market. "That's why we see a huge business potential to work with Chinese business school's overseas programs," Dan Stephenson, a partner of Bennett Group international, told China Daily.

During the tour, his company helped Jiao Tong University schedule a series of meetings with US policy makers and business leaders.

Through the program, Chinese CEOs can join their US peers and international business leaders to learn from each other, and to forge stronger bonds to become increasingly more effective in attaining their mutual organizational and entrepreneurial goals, he said.

"Chinese and American entrepreneurs should find routes to communicate understand and bond with each other. Shanghai Jiaotong University wants to be the vehicle to put them together," said Wang.

"Over the last years, Chinese entrepreneurship has been a revitalizing force in the Chinese economy," he said. "Entrepreneurship - respect, share and innovation - is the lifeblood of our economy."

Obama's trip not to 'contain' China

McDonald's will make over mainland stores

Chinese reporters shop till they drop in LA

Tesla to power up across China