Shuttlecock, a traditional Chinese sport with more than 2,000 years of history, has been brought to Houston by a team of middle school and high school students from Shenzhen, a city of southeastern China's Guangdong province. During their 10-day visit, which ends on Monday, they have put on more than 20 demonstrations.

The delegation, led by Wei Yong, secretary general of China Shuttlecock Association (CSA), and He Shisheng, vice-principal of Shenzhen No 2 Experimental School (SNES), was invited by Houston's International Festival and US Shuttlecock Federation Association (USSFA).

The touring team, consisting of seven student-athletes from SNES, has stayed busy during their visit, going to various elementary, middle and high schools in Houston to play and teach. They also appeared at an international festival and gave exhibitions at various Chinese community organizations and functions and Texas Southern University.

"Shuttlecock is a traditional Chinese sport and sport is an international language," said Wei. "Everywhere we went, American kids immediately got the game, liked it and played with our team members."

Shuttlecock became an official sport in China in 1984 and currently there are more than 20 member nations worldwide, said Cai Jinyu, vice-secretary general of Shenzhen Shuttlecock Association.

"It's a competitive sport with three people on a team. The rules are similar to soccer with the play court divided by a net like badminton," Cai explained. "The goal is to land the shuttlecock in the other team's court with any part of the body except the hands."

Sandy Phan-Gillis, president of USSFA, said that her organization and CSA has been promoting shuttlecock in Houston for the past few months with a focus on HISD (Houston Independent School District). After much effort, they finally got HISD's approval and introduced shuttlecock to selected schools. Lu Xueren, secretary general of Shenzhen Shuttlecock Association, has been teaching the game to HISD kids for almost four months now on a voluntary basis.

"We want to introduce this traditional Chinese sport to the US and we started with HISD," Phan-Gillis said. "We intend to expand it to the university level as well. We did a demonstration at Texas Southern University and it was well received. Our goal is to make it popular in Houston first, and then slowly push it nationwide here in the US. Eventually we hope to send a US team to China for competitions." 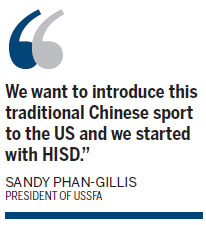 "Shuttlecock is played in three forms: competition, skill demonstration and self-entertainment, and I found out that in HISD schools, the kids like the competition form the most," Lu said.

During his teaching and demonstration, Lu said he has dispensed close to 5,000 shuttlecocks and a few hundred training books provided by CSA for free in Houston. CSA and USSFA have reached an agreement with HISD's Westside High School (WHS) to incorporate a shuttlecock program into their physical education curriculum.

"The students really enjoyed it," Delia Thibodeaux, physical education teacher at WHS, told China Daily. "I was really excited with the program. Mr Lu brought a new sport to HISD. A week after Lu introduced shuttlecock, some kids came to me and asked 'are we going to do shuttlecock again?' almost every day. The kids carry shuttlecocks in their bags and play when they get a chance."

Thibodeaux said the school's soccer coach was interested in shuttlecock and thought soccer players could benefit from the skills. "When the Chinese students came to perform at our school last week, they got to see how skillful those kids are, and they were so excited and got on the floor to play with them. I really liked it that the kids mingled together."

Travel passes to DPRK made easier

Yunnan's only panda perking up thanks to TV