Summer is near, and that means that many Chinese parents will be sending their children to summer camps in the US for an academic performance boost.

Michelle Raz, the director of the Longfeifei Youth Summer Academy in Steamboat Springs, Colorado, said that Chinese parents are keen on "rounding out their kids' experiences", so they are enrolling them in programs like Longfeifei's, which has an academic portion but also gives children time to learn about the arts and to participate in athletic activities.

"What the children have told me is that schools in China been very limited in sports and arts, where they are coming from," Raz told China Daily. "Few of them have some experiences but the vast majority haven't, so we're teaching them American games and things like soccer."

The Longfeifei Youth Summer Academy began operating in 2012 and is based in the mountains, jointly sponsored by the Lowell Whiteman School and the Fudan Fuzhong School of Continuing Education in Shanghai. The academy began in China and after seeing its popularity with families there, the schools decide to begin an operation in the US.

Parents are looking for "a little bit of creativity in their kids" that they feel American camp programs can instill in their kids, Raz said, but at the same time, "do not want to compromise academics", so the Longfeifei program has kids go to nighttime study halls. The kids' days are

The summer program is three weeks long, from the end of July to mid-August, and costs 23,000 yuan ($3,700). The fee does not include airfare or costs for offsite activities. Offsite activities include four days of sightseeing after the program ends and a visit to an American college, according to Raz. Last year, the children visited Stanford at the end of their trip and those in this year's program will most likely be visiting a college in the Denver, Colorado, area, Raz said.

The Johns Hopkins Center for Talented Youth (CTY) has seen a dramatic increase in Chinese student enrollment to its summer programs. Samuel Robfogel, senior director of international initiatives at the center, said that there were about 60 students from China in 2007 and about 500 plan to enroll this year. Its sessions are held at various universities across the country. 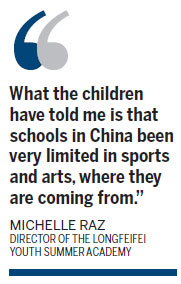 Robfogel said that "Chinese families certainly seek programs and camps that are best in their class, and the Center for Talented Youth (CTY) has a strong reputation around the world, so that may be driving the interest." Mark Zuckerberg, founder of Facebook, once studied math and science at the center.

"CTY courses may also emphasize a different approach to learning that appeals to Chinese families," Robfogel said. "We believe that answers reside in the students, and our problem-based curriculum develops students' abilities to find those answers."

The CTY programs take place in multiple sessions across the summer, all of which run approximately three weeks. The programs cost from $3,000 to $5,000 per three-week session, and don't include application fees and other administrative and service fees.

Avenues, a New York-based private school that opened in 2012, has a two-week intensive summer program for language learning. The school offers Mandarin or Spanish immersion programs and doesn't yet have a program for international students looking to study English. But due to demand, Avenues plans on creating an English immersion program for the New York campus, catering mostly to Chinese students, according to Chris Whittle, chairman of Avenues. The English-language immersion program will most likely open in the next year and a half, Whittle said.

"Are Chinese parents interested in English immersion programs? Beyond a doubt," he said. "And they are interested both in China and in sending their students to special programs in the United States as well."