Foreign technology services providers such as Google and Apple can become cyber security threats to Chinese users, security analysts said, one week after China announced that it will put in place a security review on imported technology equipment.

Other major tech companies, such as Yahoo, Cisco, Microsoft and Facebook, were required by the US National Security Agency to transfer their users' information, according to Wan Tao, founder of Intelligence Defense Friends Laboratory, an independent institution focusing on cybersecurity in China. Wan said that online services have become a major way for the US to steal information globally.

Zhu Zhiqun, director of the China Institute and professor of political science and international relations at Bucknell University, said this should be a big concern for China, Chinese businesses and Chinese customers.

"In the cyber war between the US and China, obviously the US has the upper hand due to its superior technology and more extensive intelligence network," Zhu said.

Zhu believes while both the US and China wish to protect their national security and economic interests, their spying activities will only increase in the years ahead.

"It is time for the two sides to sit down and map out some basic protocol on cyber security. The two countries may not be able to narrow their differences regarding cyber espionage, but they can at least try to set some basic rules," he said.

Ning Jiajun, a senior researcher at the Advisory Committee for State Informatization, said, "Previously, the US asked companies to install wiretapping software on their technological products, but if users found and shut down related functions, its 'plan' would fail," he said.

For instance, information on a Chinese organization can be stolen when it places an order on an international shopping website, he said.

With technologies such as cloud computing and big data getting popular, information can be collected and analyzed immediately, which means the damage can be much greater and more difficult to prevent, analysts said.

"It can be said that those who master online services can get more information in cyberspace," said Du Yuejin, director at the National Engineering Laboratory for Cyber Security Emergency Response Technology.

Last month, China's Internet Media Research Center issued a report saying the NSA makes use of large technology companies for its wiretapping plans, including Prism, which was unmasked by former NSA intelligence leaker Edward Snowden, asking them to collect information on their users and urging them to hand in the data regularly.

The report also said that the NSA has taken iOS and Android, two leading mobile operating systems applied to iPhone and Samsung, as a "gold mine" of data. 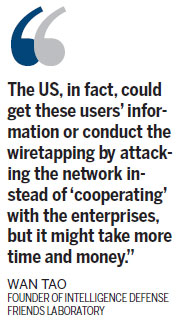 The NSA grabbed users' information and stored most of it for analysis by invading database and communication networks of Yahoo and Google, while it has also controlled applications on smartphones with Britain, said the report released at the end of May.

"The US, in fact, could get these users' information or conduct the wiretapping by attacking the network instead of 'cooperating' with the enterprises, but it might take more time and money," said Wan.

The actions of the NSA have put huge pressure on US technology companies, as customers from Paris to Sao Paulo and from Beijing to Berlin worry about their privacy being invaded.

While US tech firms have tried one after the other to deny its collaboration with the NSA, NSA's general counsel Rajesh De revealed at a hearing in March that the tech companies knew about and assisted with PRISM's data collection.

"They [tech firms] would have received legal process in order to assist the government," De said.

A recent PBS documentary, United States of Secrets, aired in May, shows that NSA has gathered data from users from US tech companies both with and without their knowledge.

China Daily's request on Tuesday for comment sent to the press offices of Google, Yahoo, Facebook and Apple were unanswered by press time.

Obama held two discussions with CEOs of major US technology companies in the past six months about the NSA snooping, which led to a "reform" of the NSA to focus on protecting US citizens' privacy, but with little improvement on foreign organizations and citizens.

US duty on China's PV products

US missile defense against DPRK?