The Caribbean has great potential for Chinese businesses and travelers, panelists said at a symposium on promoting bilateral investment in the area.

An audience of more than 200 - including members of the New York City and Chinese government, tourism and trade officials, entrepreneurs and business leaders - attended the fourth Invest Caribbean Now Summit on Wednesday at the Harvard Club in New York. The theme for this year's event was Advancing Wealth in the Caribbean.

Ma Lin, deputy secretary-general of the Beijing Municipal Government, said in his introductory remarks at the daylong event that tourism has become "a pillar industry" in China, one that could help generate additional trade between China and Caribbean countries.

"Beijing, as the capital city of the People's Republic of China, enjoys a number of tourism resources," Ma said. "The growth of China's outbound tourism has made it a thriving industry."

"The Caribbean region has great potential for Chinese people, but only a small portion of China's outbound tourists visit the region," he said. "Due to inconvenient transportation and a lack of information exchange, most citizens from Beijing are unaware of tourism in the Caribbean region."

"There are two numbers I think people should know," Lee said in a panel discussion entitled Global Trends & the Caribbean. 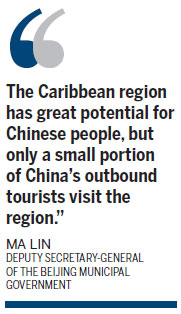 "For 2013, there was a total of 98 million Chinese people traveling overseas. The second number is $129 billion, which is how much money Chinese spent overseas in 2013."

"I do believe people in China lack knowledge about the Caribbean," Lee said. "We do need to educate people about that area, and China Daily can be a good vehicle to convey that kind of message to readers - both in China and on other continents."

The Caribbean region's GDP in 2013 totaled more than $90 billion in 2013, according to the event's organizers.

Tourism has been a big driver of economic growth for China in recent years, but people in the world's most populated country have traditionally had little to do with Caribbean region, Ma said in an interview with China Daily.

He said cooperation between China and Caribbean nations in trade and tourism would help bring "relations to a new level".

"There must be an effort to develop the infrastructure for an investor coming from a developed country," Williams said on the Global Trends & the Caribbean panel. "People want to feel secure about the transparency and safety of their investments, so it is important to understand as we move forward how to hedge against uncertainty."

Ma said that "first, we need Chinese consumers to know the basic conditions. Then both sides can work together to facilitate this process for investments."

Ma also said the number of China's outbound tourists exceeded a total of 90 million people in 2013, but by 2020 Chinese officials expect that figure to increase to more than 200 million.

"Through this meeting Caribbean countries can have a deeper understanding of Beijing so that people can have the cooperation to promote common development," he said.

Putin responds to 'aggressive' US

G7 willing to step up sanctions on Russia

Drill may calm choppy ties with US