Zhaopin CEO Evan Guo said the listing is a "very important event" for both the company's internal and external operations.

"Zhaopin is a very popular brand in China," Guo said Thursday in an interview with China Daily. "The listing internally will bring us more rigid accounting policies, but I think the branding is quite critical."

Zhaopin, founded in 1994, is a leading online-based employment recruitment platform in China. Operating out of its Beijing headquarters, the company offers services to more than 75 million registered users in China.

The company controls the most popular online jobs portal in China, as measured by unique daily visitors, per data from iResearch, a China-based Internet consulting group. And Guo said Zhaopin is also the second largest job recruitment provider based on revenue, second only to China-based 51job Inc.

SEEK International, Australia's largest online job site, is the majority owner of Zhaopin, with close to an 80-percent stake in the company, per data from company officials.

For the nine-month period that ended March 31, more than 11 million job postings were placed online with Zhaopin, a year-on-year increase of 56 percent according to company data. 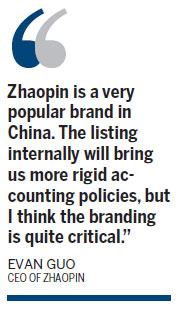 Zhaopin has also secured a concurrent private placement deal with Apax Partners, a New York-based equity-management group, that in conjunction with stock options for underwriters, could bring the total raised through Zhaopin's offering to more than $100 million.

"[Zhaopin] wants to concentrate on the domestic market because that's where their stronghold is," said Josef Schuster, founder of Ipox Schuster LLC, a Chicago-based independent financial-services firm specializing in global IPOs. "They seem to be valued in line, but it always depends on whether they meet the fundamentals of earnings and revenue growth."

Schuster also said Zhaopin is part of "another huge wave of Chinese IPO activity" taking advantage of the "window of opportunity" for Chinese IPOs ahead of Alibaba.

US options could help combat advances by Iraqi militants

Army: Bergdahl 'looked good' after returning to US

Cui: China poses no threat to US