A manufacturing gauge for June has hit a seven-month high, indicating that progress has been made in stabilizing the world's second-largest economy thanks to modest policy measures, analysts said.

The preliminary reading of the HSBC/Markit Economics Purchasing Managers Index for this month was 50.8, the highest figure since November, compared with a final reading of 49.4 in May. A figure above 50 indicates expansion.

Economists said the index shows that the economy has started to stabilize after Premier Li Keqiang vowed in London last week that it would not experience a hard landing.

"This month's improvement is consistent with data suggesting that the authorities' mini-stimulus is filtering through to the real economy," said Qu Hongbin, chief economist for China at HSBC.

"The economic slowdown is likely to bottom out, but the stimulus measures should be continued to offset a downturn in the property market," he said.

Qu said much of the recovery was driven by domestic consumption, as growth in new export orders slowed sharply in June.

Hu Shaowei, senior economist at the State Information Center, said it might be too early to say the economy has bottomed, but it has started to stabilize. 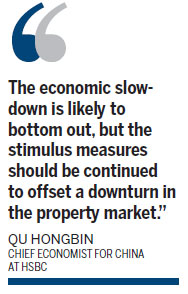 It will continue to grow smoothly in the second half of the year, Hu said, adding that a major stimulus is unlikely.

The economy grew by 7.4 percent in the first quarter, the lowest for 18 months, due to weak domestic and international demand. China has set a target of 7.5 percent for economic growth this year.

To boost growth in recent months, the government has launched modest stimulus measures including tax cuts and accelerated spending.

Li said on Wednesday that the economy would not see a hard landing and would continue to grow at a medium to high pace in the long term without strong stimulus measures.

"We have the ability to maintain this targeted approach," he said in London. "We will not resort to strong stimulus, but rather smart and targeted regulation to ensure that major economic indicators, including the 7.5 percent growth target, remain and ensure a sustained rate in the future."

US-China ties get a boost from grassroots