The US gambling industry is losing big bucks under China's anti-corruption campaign.

The traditional Chinese New Year travel holiday has ended, but casinos in the US barely felt the warm embrace of Chinese tourists to the extent they did last year. An expert in the gambling industry said because of China's anti-corruption campaign, Chinese "high rollers" dare not throw money like water in the casinos, and that Las Vegas casinos will hardly see an increase in income this year if they keep losing Chinese customers.

According to statistics from the Las Vegas Convention and Visitors Authority, in 2014 more than 41 million tourists visited the entertainment capital of the world, which brings in more than $45 billion to the local economy.

Grant Govertsen, an analyst of gambling industry at Union Gaming Groupe, said that in the past few years during the Chinese New Year holiday, the income from Chinese customers occupied 20 percent to 25 percent of the whole Las Vegas gambling industry, and in the year of 2013 this number even reached 38 percent.

Weeks before the Chinese New Year, casinos in Las Vegas had decorated with red lanterns, goat statues and spring festival couplets to welcome the Chinese Year of Goat. Local casinos and luxury hotels joined in the celebration of China's biggest holiday.

The Bellagio Hotel and Casino looked extremely fabulous this year. The hotel put 22,000 red flowers and potted plants in the lobby. The hotel also made a 4-meter-tall artificial hill along with five artificial goats to greet Chinese customers.

"In the past few years, income of Las Vegas casinos was raised a lot during the Chinese New Year," said Govertsen. "Maybe it's because Chinese tourists wanted to start a lucky year by winning in a gamble game."

However, there were not so many Chinese gamblers coming to Las Vegas as the casino had expected this year, and the hustle and bustle didn't happen during the traditional holiday. As a matter of fact, the analyst pointed out that the liquidity from Chinese VIP segments has shrinked rapidly since President Xi Jinping stepped up his campaign against official corruption in 2014.

Consider the Las Vegas Sands. Its famous Vegas properties such as the Venetian and the Palazzo made up a mere 10 percent of its sales in 2014, according to the company's latest earnings report. It's a similar story for Wynn. Its Vegas operations drive less than a third of the company's entire business last year.

According to the data from Nevada Gaming Control Board, revenue of Las Vegas casinos in last October was $520 million, declining 5.6 percent just in one month. Moreover, revenue from baccarat tables dropped 36 percent in that month. Income from the baccarat tables can decide the revenue of the whole casino, and the baccarat game is usually called "benchmarking of US casino profitability".

Brent Pirosch, a Las Vegas-based analyst at world leading commercial and investment company CBRE, said baccarat game is a game for rich gamblers, and some gamers can wager $100 on the table. For those from the Far East or Middle East, the bet per round can reach as high as $100,000.

To meet the need of Chinese VIPs, casinos created some customized products, such as VIP rooms with elite services and excellent equipment facilities.

In spite of the importance of VIPs, the segment is not that large. Pirosch said VIPs in the entire Las Vegas gambling industry are merely less than 150. Therefore, if the VIPs declined, even just declined a little bit, the whole industry would suffer obvious impact.

The pressure of rich Chinese gamers, some of whom are officials, comes from the intensive anti-corruption campaign, said Govertsen.

Analyst insists that Las Vegas casino fortunes may have taken another body blow this year after China's President Xi Jinping announced plans to intensify his anti-corruption campaign in 2015.

The country will also work out revisions to the Law on Administrative Supervision, said Zhang Dejiang, chairman of the National People's Congress (NPC) Standing Committee, while delivering a work report at the annual session of the top legislature.

He stressed that the anti-graft legislation should be introduced as quickly as possible and the system of sanctions and prevention improved with the goal being a mechanism which means "officials dare not, cannot and do not want to be corrupt".

Criteria for imposing penalties on criminals found guilty of corruption and bribes would be modified. Heavier penalties will be imposed on those offering bribes, according to a draft amendment to the Criminal Law submitted to the NPC Standing Committee for a first reading last October.

"Any form of moving a large amount of money out of China would be a lot more difficult because of what's happening," said Hoffman Ma, deputy CEO of Ponte 16 Resort in Macao. "Obviously, the government doesn't want the corrupted officials to be able to move their money out."

That is likely to result in continued pressure on Chinese VIP gamblers, Govertsen said. He predicted that the revenue in 2015 would maintain a relatively low level.

To expand their market and attract more Chinese VIPs, leading Las Vegas casinos have built up business in Macao, which is a Special Administrative Region of China that lies at the mouth of the Pearl River Delta, about an hour's ferry ride from Hong Kong. It covers a land mass about half the size of Manhattan. It is the only place in China where gambling is legal.

However, a downturn in Macao also happened. Since last June, Macao's revenue has fallen so fast, that in October it plunged 23 percent, which is the biggest drop on record.

Ma said the VIP segment of local casinos was suffering roughly about 20 percent decline per month in the middle of 2014.

The Macao slowdown is hurting Vegas veterans - and investors in these companies. The stocks have fell sharply in the past year.

As a matter of fact, because of the downturn of business in Macao, since last April, three of the largest gambling companies in the US, Las Vegas Sands Corp, Wynn Las Vegas and MGM Resorts International, have lost one-third of their market value.

"Wynn and Las Vegas Sands have been betting big on Macao so that's why the stocks have been lousy," said John Staszak, an analyst at Argus Research, who has a hold rating on Wynn. 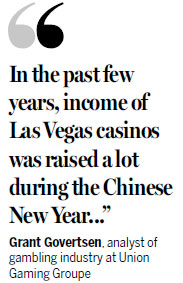