The world's second-largest economy is surpassing others in many areas, including the use of the Internet.

A new report by the International Telecommunication Union (ITU) shows that in China, 75 percent of all Internet users now access the web via a mobile device, exceeding the proportion of users accessing the Internet via a fixed connection (71 percent) for the first time in 2012.

The ITU report - The State of Broadband 2013 - presented at the latest Broadband Commission for Digital Development meeting in New York, said that mobile broadband subscriptions are now growing at 30 percent annually.

The report said China, among the nations with a growing number of broadband subscriptions, adopted the so-called "Network Convergence - National Government Investment" plan in 2010 - an initiative that aims to integrate telecommunications, TV and radio and the Internet. The pilot cities included Beijing and Shanghai, as well as other urban cities such as Dalian, Nanjing, Hangzhou and Qingdao.

"China has made special efforts in telecommunications especially in the last 15 years; [it] has great companies that have good technologies," said Carlos Slim Hel, chairman and CEO of Telmex and Amrica Movl, who co-chairs the Broadband Commission for Digital Development.

The Mexican telecom magnate, who is ranked by Forbes the No 1 billionaire in the world, said that China has done a "great job" in developing telecom equipment and mobile handsets. But the country, he said, still needs to catch up in developing (Internet) applications, whose main market is still Silicon Valley.

The ITU says that there will be 2.1 billion mobile broadband subscriptions at the end of this year, equivalent of one third of total mobile cellular subscriptions. That number includes China's Internet populace of some 590 million, which is expected to growth further.

During the first half of this year, China added a total of 26 million new Internet users, according the China Internet Network Information Center. The user growth raises the country's Internet penetration by two percentage points to 44 percent. In some rural areas in China, Internet penetration is at less than 30 percent, showing more room for growth.

China's growth in Internet users doesn't just go by numbers but also shows signs of gender-balanced participation, which, according to some ITU researchers, is a major problem in many countries, especially in developing and least developed countries.

China's broadband plan prioritizes female access to the Internet, which is among less than a third of countries worldwide that have such a gender-focused plan, said Phillippa Biggs, a coordinator of the Broadband Commission with the ITU and the lead author of the IUT report.

"It is a very difficult issue because people's perception of this issue depends on where in the world they are standing," said Biggs, adding that in some countries like China this "battle has been fought and won".

Countries in Eastern Europe and China are much better in balancing gender in the use of Internet than Western countries and the US, noted Biggs.

Biggs said keeping a gender-balanced online populace matters in particular in how economic growth performs in a country. 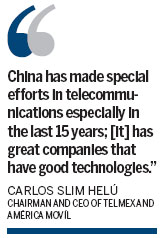 Despite the fact that information technology and telecommunications skills of citizens are directly linked to a country's economic growth, the challenge still remains to keep it "sustainable". "The challenge is to find sustainable business models to leverage broadband in a way that helps accelerate development where it is most needed," said the report.

Keeping the Internet a "trustworthy environment" is another challenge, said Janis Karklins, assistant director-general for communication and information for the UN Educational, Scientific and Cultural Organization (UNESCO).

"Multi-stakeholder dialogue is necessary in every country and every part of the world, including China," noted Karklins.

US woos Malaysia in TPP talks

Trending news across China on Oct 11