Land of 1,000 lakes rich in resources 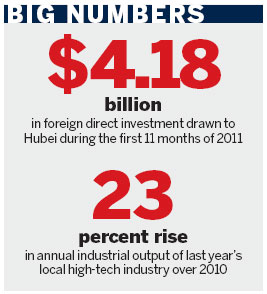 The Three Gorges Quantong Coated and Galvanized Plate Co Ltd, based in Hubei province, secured 35 billion yuan ($5.6 billion) worth of orders at the end of 2011. The company has grown into the largest domestic manufacturer of ultra-thin coated and galvanized plates over the past few years.

"It is Hubei that makes my career," said Liang Shichen, board chairman of the company. Liang isn't the only one who feels the charms of the Central China province.

Hubei attracted more than $4.18 billion in foreign direct investment during the first 11 months of last year, an increase of 12.6 percent year-on-year.

Nearly 100 of the Fortune 500 firms set up facilities here. Large State-owned enterprises have signed on to 78 major provincial projects at a combined investment total of 520 billion yuan.

With greater prestige and growing appeal to investors, the province is emerging as an investment hot spot, observers said.

Driven by investment projects, Hubei generated 1.96 trillion yuan in annual production value in 2011, increasing 13.8 percent over 2010 and ranking among the top 10 provincial economies.

Behind the boom lay the rich resources of Hubei, dubbed as "the province of 1,000 lakes". Part of the Three Gorges Dam Project, topping the world in electricity generating capacity, is located here.

The provincial capital of Hubei has transformed into an inland high-speed railway hub. The Yangtze River and the Hanjiang River converge there.

Along with national agricultural bases - the Hanjiang River Plains and the North Hubei Hillocks - the province is a grain center. Its production of cotton, edible oils and freshwater products stands at the forefront of the nation.

Compared with its natural richness, Hubei remains abundant in human resources as well, since 122 universities and colleges along with about 1,500 research institutes have been based here.

It has imported 78 overseas experts and specialists since the central government initiated the Recruitment Program of Global Experts in 2008.

Hubei has sharpened its edge in R&D capacity in a range of high-tech sectors, including optoelectronics information, new materials, bioengineering and biomedicine, aerospace, computer-controlled technology, software and laser.

The high-tech sectors captured more than 230 billion yuan in annual industrial output last year, an increase of about 23 percent compared with 2010.