The brutal murder of 65-year-old immigrant Hua Shun Lei from Taishan of South China's Guangdong province, together with four family members, all found to be killed in the morning of March 23 at their San Francisco home, came as a tragic shock to the city's Chinese community, and their hometown fellows living in China and the US.

Mourners laid flowers at the entrance to Lei's home while teachers and students from the middle school where Lei used to teach in China set up mourning pages on their alumni website.

Lei, known as Lei Huashun in China, together with his wife Wan Yi Wu, 62, daughter Ying Xue Lei, 37, son Vincent Lei, 32 and his son's girlfriend Chia Huei Chu, 30, were found dead after being killed at their two-story house near the City College of San Francisco.

San Francisco Mayor Ed Lee said it is a "terrible tragedy" in a statement issued offering condolences on the same day.

On Wednesday, a Vietnamese man Binh Thai Luc, 35, was charged by prosecutors with five counts of murder, including special circumstances of committing multiple murders, robbery and burglary, according to court documents.

No motive for the murder has been determined.

To neighbors living on the same street, the Lei family appeared to be amiable people. They described Lei and his family to be quiet and nice.

To co-workers at R & G Lounge, a Chinese restaurant in downtown San Francisco where Lei was employed for the past 18 years after he immigrated to the US, Lei was respected for his hardworking, positive attitude and broad knowledge.

Lei and his wife had two properties on the same street. The house where they were killed is registered under the name of their daughter, Ying Xue Lei, who was a software engineer at Quantitative Medical Systems in Emeryville, according to Roxanne Albertoli, an administrative assistant with the company. "She was a wonderful person, she didn't deserve this," Albertoli said.

Owner Huang Jian closed the restaurant for one hour on March 26 to hold a memorial service for Lei, and more than 60 employees gathered at lunch time to mourn the death of their beloved co-worker.

"I am too sad to talk and can't sleep well at night. We will try our best to help out Lei's family," Huang told China Daily on Wednesday.

As one of the most veteran employees in the restaurant, Lei was referred by Huang as a model immigrant, who started from scratch after moving to the US and worked his way from a kitchen helper to a cook.

His cooking skills were also commended by Huang and other co-workers, along with his good manners and pleasant personality. Some said that he was the best at preparing roasted duck in slices, according to reports from local Chinese media.

According to co-worker A Su, Lei spoke no English and liked Cantonese opera.

"Many of us were crying. He is remembered as a very good man, a decent human being," said Kenny Chen, a waiter at the restaurant.

"We are waiting for a foundation account to be set up from a local organization to donate money. I can't release details but many employees all chipped in to help out," said Liu Mei Ling, Lei's colleague.

With virtual white roses and candles, alumni from Yuehua Middle School in Taishan mourned the loss of their math teacher in cyberspace.

A spontaneous donation has been ongoing on the online alumni bulletin board of Yuehua Middle School in Taishan, Guangdong province, where Lei worked 18 years ago.

"I still can't believe it! My heart is filled with sorrow and anger after hearing the news," Lei Gongling, one of Lei's students between 1977 and 1979, told China Daily from Hong Kong on Wednesday.

"He is such a nice and respected teacher who never loses his temper, even with the naughtiest boy," he recalled.

He said donations from Lei's students and friends are being sent to San Francisco.

"We all hope the killer be punished for killing of the five innocent Chinese!"

Luc made his initial appearance in court on Wednesday. In addition to the five counts of murder, Luc received a special circumstance of lying in wait in the death of one victim, which would make him eligible for the death penalty if convicted.

Lei was a warmhearted person who cared about his students' career development even after he came to the United States, according to a condolence article released by a netizen named Baiyunjianke on the alumni website, who claimed to be a student in Yuehua Middle School in 1979.

According to him, Lei initiated the first alumni party in 2004 for 1979 graduates, "bringing closer the friendship of former classmates".

According to his hometown fellows living in the America, many of Lei's students also moved to the US and some regretted the quality of Lei's job, believing he deserved something better. Lei, however, always took the change positively and said he should meet the challenges of life.

The Consulate-General of China in San Francisco has called on local Chinese to improve security awareness and encourage people to watch out for neighbors.

"We encourage Chinese who have language or law problems to seek help from us," Yang Shunfeng, the consul in San Francisco in charge of overseas Chinese affairs, told China Daily.

He said the Consulate-General of China in San Francisco has provided a contact number to one family member in the US in case help is needed.

"I kept receiving phone calls from Lei's friends in China this week, and tried hard to provide the latest information to comfort them," he said.

Eric Yu, the executive officer of Soo Yuen Benevolent Association, told China Daily they have received many phone calls from members and the public inquiring about what to do and how they can help Lei's family.

A board meeting will be held Friday to determine how to help the Lei family and discuss the account set up for private and public donations, Yu said.

Luc was convicted in 1998 of the armed robbery of a Chinese restaurant in San Jose in 1996. He was in prison from 1998 to 2006 and then served two years of parole. He was believed to know the victim family.

It was the second high-profile case involving the Chinese in the US in 2012. In January, two masked men gunned down a 27-year-old Chinese store owner right in front of his wife and baby girl in Philadelphia. 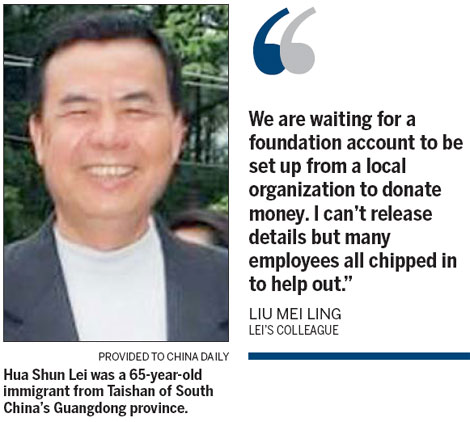