The United States' trade deficit with Chitna reached an all-time high of more than $35 billion in September, representing 80 percent of the US' total trade gap of $43 billion, according to US Commerce Department data released Tuesday.

Economists are calling the development the result of macroeconomic shifts in the world's two largest economies.

Some of the main countries the US trades with, including the EU and China, are experiencing economic deceleration, according to David Dollar, a senior fellow at the Brookings Institution's John L Thornton China Center in Washington.

"Right now the United States' growth is quite good and accelerating, whereas Europe is in danger of going into recession and China is slowing down, so it's not surprising that US exports to Europe and China fell," Dollar said.

"It's the natural developments of each economy that is leading to these short-term movements," he said. "When you have these cyclical developments, it makes the imbalance bigger."

Barry P. Bosworth, an economist with the Brookings Institution, wrote in an email that the change in the trade balance between the US and China is "very large and should be smoothed".

"The trade deficit with China is all in the processing sector and it's driven by US electronic firms," Bosworth wrote. "On a trade-weighted basis, the dollar has been rising since mid-2011. What has changed is the weakening economic situations in other countries." 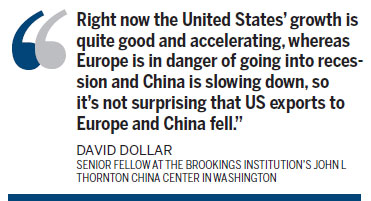 American purchases of Chinese goods in September helped push the trade gap between the two countries from $30.2 billion in August to $35.6 billion in September.

The latest data from the US Commerce Department shows that the US imported $44.9 billion worth of goods from China in September, up $5.1 billion, or 12.8 percent, over August, whereas US exports to China fell 3.1 percent to $9.3 billion in the same period.

Advanced technology imports to the US, including cell phones and other telecommunications devices, saw their biggest month since November 2012.

Much of the $5 billion increase in US imports from China can be attributed to a $3 billion uptick in cell phone purchases, according to a story in the Wall Street Journal.

"US imports from China increased and that's consistent with people having more income and the US economy growing well," Dollar said.

Overall the US trade deficits increased 7.5 percent to $43 billion, ending four straight months in which the deficit had narrowed, the Commerce Department said.

Total American exports decreased by $3 billion, or 1.5 percent, to $195.6 billion in September, the lowest reading since April. Imports in September were virtually the same compared with the month-ago period.

The monthly trade gap was last below $40 billion in January, and US petroleum imports tallied their weakest totals since November 2009.

September's deficit figure was larger than the $38.1 billion gap the government issued in an estimate last week.

China's gradual appreciation of the yuan has drawn praise from the US Treasury Department in recent years, but last month the Treasury said the currency is still "significantly undervalued".

"China continues to intervene to keep its exchange rate low and the rate has become more market determined in recent years, so there's been a lot of progress," Dollar said. "Frankly, that's an issue that may very well come up when President Obama visits China next week."

Yun Sun, a fellow at the Henry L. Stimson Center, wrote in an email that the strong value of the US dollar certainly affects US exports.

"If we look at the dollar-RMB exchange rate, the appreciation of the dollar has been less dramatic," Sun wrote. "The weak demand from China and Europe also contributes to the drop in US exports and the widening trade deficit."

China, US must lead on climate: experts

Is Xiaomi ready for Western markets?