China's need for energy efficiency is on the rise, and one US multinational sees its new heat-recycling technology as a way to help reduce the reliance on coal in the world's second-largest economy.

The YDST, the first of its size and an addition to the company’s existing line of steam turbines, can reduce coal consumption by up to 30 percent.

By tapping surplus hot waste water from industrial facilities or power plants and superheating it up to 200 degrees F, the steam produced can drive large turbines that provide the same amount of energy as coal-powered generators.

"Johnson Controls is helping China reduce emissions by developing and manufacturing new building products that keep the air clean and reduce energy use," Bill Jackson, president of JCI's Building Efficiency unit, wrote in an email to China Daily. "These innovative building technologies help expand our presence in a growing market."

Johnson Controls has successfully implemented a heat recovery solution at a large heating facility on northeast China that has already saved $1.2 million while alleviating the need to burn 9,200 tons of coal over the last heating season, according to a press release. 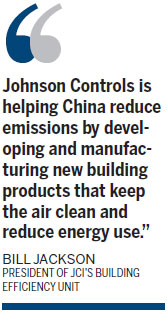 The company says that's the equivalent of removing 4,000 cars from the roads for a year.

Soren Bjerg, vice-president and managing director of JCI's Building Efficiency division in the Greater Asia Region, said that the launch of YDST is an opportunity to expand the company's presence in China and use its expertise to address a "growing need to reduce emissions".

"Urbanization and the government's efforts to promote sustainable development are driving demand in China for more energy efficient technologies and solutions," Bjerg said.

The technology is an important innovation for the Chinese market where the government has made a major commitment to reducing pollution from the burning of fossil fuels. In essence, it is converting excess industrial heat into urban heating.

Earlier this year JCI opened a $35 million expansion of its manufacturing and research and development center in Wuxi, Jiangsu province, a revamp that tripled the company's manufacturing capacity in China.

Though the government in Beijing has made a commitment in the current Five-Year Plan to reduce emissions and other environmental pollutants, coal is still one of the primary energy sources in China.

China is the world's top coal producer and consumer, according to data from the World Coal Association.

"Even though there is a bit of a slowdown in China, we're outperforming the market," Molinaroli said during an Oct 30 earnings conference call. "We've talked about focusing on winning customers, higher growth markets in China, etc. If you look at China for the year, we really hit a milestone."

Bruce McDonald, JCI's vice-chairman and executive vice-president, said during the conference call that business in China continues to be an area of solid investment for the company.

"We're there in China, but it takes a long time," McDonald said.