The recent crash of a Virgin Galactic passenger spaceship has done little to quell individuals' desire for space travel nor the interest of Chinese investors.

The Virgin Galactic SpaceShipTwo crashed Oct 31 during a test flight near the Mojave Air and Space Port in California. One pilot died and another was seriously hurt in the crash. The accident occurred shortly after another a rocket owned by another private space company,Orbital SciencesCorp, exploded after taking off in Virginia.

Jane Poynter, co-founder and chief executive officer of Tucson, Arizona-based World View Enterprises Inc, said in Beijing on Nov 7 that her company has received another round of investment, including from Chinese Internet giant Tencent Holdings Ltd.

Poynter said that David Wallerstein, senior executive vice-president and chairman of Tencent USA, has already met with one of World View's pilots and exchanged ideas on technology.

World View plans to launch suborbital spaceflights for $75,000 per seat in 2016.

Unlike other companies that send people into space with rockets, World View uses balloons and space capsules that carry passengers slowly to nearspace and then bring them down to Earth using huge parachutes. 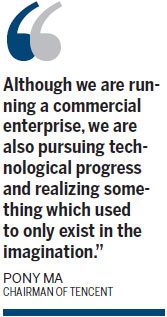 Interest in space travel has accelerated in recent years. Arguably the two best-known projects are Sir Richard Branson's Virgin Galactic, and XCOR Aerospace, a privately held company in Mojave, California, that is developing similar trips on rocket-propelled vehicles, which it also plans to make affordable.

Both companies also have received investment from Internet giant Google Inc, which also has invested in unmanned cars, hot-air balloons and space mining.

Zhang Zhidong, co-founder of Tencent, said the company should follow Google in this type of venture investing.

Pony Ma, Tencent's chairman, once said that his childhood dream was to be an astronomer, after he had gazed through a friend's telescope.

"Although we are running a commercial enterprise, we are also pursuing technological progress and realizing something which used to only exist in the imagination," Ma said. "This is a dream."

More than 800 people have paid deposits to fly aboard the next Virgin Galactic spaceship, which will be transported to an altitude of about 13,700 meters before being released.

The spaceship is based on a prototype of the SpaceShipOne, which won the $10 million Ansari X Prize a decade ago for being the first privately developed manned spacecraft to fly in space.

The space travel industry is years away from having a commercial impact, so Tencent's investment is a long-term plan, Derek Scissors, resident scholar at the American Enterprise Institute, told China Daily.

"It's more likely that Tencent, like other Chinese companies, simply wants a high-profile American presence," he said. "Imagine being the first Chinese company associated with a successful space plane - the reward is not profit," Scissors said.

"I doubt there will be much American interest beyond the current business interest in attracting Chinese funding," said Scissors. "This is not sensitive technology or a sector that will draw political attention."

Tencent's overseas investments are positive both for the tourism industry and business cooperation, said Bai Jie, visiting fellow on Freeman Chair China Studies at the Center for Strategic and International Studies.

President Xi Jinping said at the Asia-Pacific Economic Cooperation meeting that Chinese overseas investment would reach $1.25 trillion in 10 years and that the number of Chinese overseas visitors would rise to more than 500 million in five years.

Sheng Yang in Washington and Reuters contributed to this story.

Youth urged to get politically involved

Yili closes deal with DFA in setting up US dairy plant