A Chinese theme park has won an award from an international industry group for the first time.

The Ocean Kingdom, which is operated by the Guangzhou Chimelong Group Co Ltd, received the Themed Entertainment Association (TEA) Award for Outstanding Achievement.

The Chimelong Tourist Resort in Guangzhou, also in Guangdong, was nominated for an Applause Award, the first time an Asian theme park was nominated.

"We will keep making efforts to bring happiness to families from all over the world," Shi Yuxiong, senior consultant in the international development department of Chimelong Group, told the media. "I believe it will attract even more international visitors," said Shi, because of its proximity to Macao.

"The most important criteria we looked at are the quality of the service, the tourists' experiences and the creativity," said Monty Lunde, TEA president, who called Ocean Kingdom "incredible" and "outstanding among all the 169 candidates". 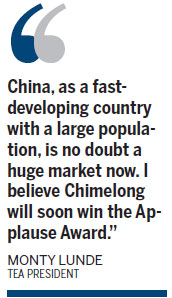 Mario O. Mamon, IAAPA chairman, told China Daily that theme parks in the Asia-Pacific region have grown the most recently and play an increasingly important role in the industry.

"China, as a fast-developing country with a large population, is no doubt a huge market now," Mamon said. "I believe Chimelong will soon win the Applause Award."

Su Zhanpeng, vice-president of Chimelong Group, told China Daily that the company will build a hotel with 2,000 guest rooms in Zhuhai. "It will be the largest hotel in China and will boost Chimelong's business," Su said.

The Applause Award was established in 1980 by Liseberg, a world famous theme park in Gothenburg, Sweden. The award is given every two years in recognition of accomplishment in management, operations and creativity and inspiration. The judges come from the US, UK, Sweden and other Western countries.

The Applause Award has usually gone to a Western theme park. The US has won it 12 times, including awards by Universal Studios Florida and Islands of Adventure in Orlando.

APEC a win-win for US, China: officials

China then and now through a lens

Chinese firms starting to think outside the box