Gay people in China are being offered a variety of dating apps to improve socializing and locating companions.

Baoli Ma, a former policeman in China, launched Blued, a Chinese-language dating app for gay men in 2012. It has more than 15 million users, including 3 million outside of China. His company, Blue City, received $30 million in funding last month from US venture capital company DCM Ventures, according to an Associated Press report. DCM, with offices in Beijing and Menlo Park, California, didn't respond to requests from China Daily for comment.

Ma may use the money for overseas expansion, an initial public offering and a dating app for lesbians, AP reported.

The app enables group settings so people can organize activities such as hiking or assembling a basketball team, as well as providing information from health authorities on locations for HIV testing and treatment, AP said.

Wu Zunyou, director of the Chinese Center for Disease Control and Prevention's AIDS and sexually transmitted diseases center, praised the app for its usefulness in conveying information to the lesbian, gay, bisexual and transgender, or LGBT, community, AP reported.

One year after Baoli launched his dating app, Jeff Ling started Zank, a social app for male homosexualsin China that has over 10 million users.Ling and Zank have secured a couple rounds of private financing and the Zank subsidiaryLaven was one of the first apps for lesbians in China.

"I think gay dating apps mainly solve the problem of finding gays around you. As self-recognition and social recognition of the gay community are getting stronger, and with the development of mobile Internet developers, finding gay friends around you is no longer a problem. We hope that gays could find real friends or people sharing the same interest," he told China Daily in an e-mail. 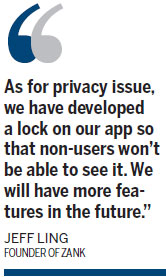 "Whether it is QQ or WeChat (instant messaging services in China), they cannot fully satisfy everyone's every specific need," she said in an e-mail. "That's why apps targeting a certain group of people, including gay dating apps could develop. There are a lot of homosexuals in China and the environment is generally getting friendlier for them, so the economy is there."

Pan said that good foreign apps are popular in China, but local apps know the Chinese better and can make a compelling business case. "Based on download volumes, they are as popular as the foreign counterparts. Apart from charging users' premium fees, they could also work with e-commerce or other businesses seeking promotions."

Feifei is a client of Blued who lives in Shanghai. "I use it to see good people around me, and if we are really compatible, we may go out and eat together," he told China Daily. "Sometimes, I do worry about my privacy but not much." Feifei requested that China Daily use a pseudonym for him.

"As for privacy issue, we have developed a lock on our app so that non-users won't be able to see it. We will have more features in the future," said Zank's Ling.

There are no official statistics on the gay population in China. But based on international studies which suggest gays can account for 3 to 4 percent of a population, the number of gay people in China could range from 39 million to 52 million, according to Li Yinhe of the Chinese Academy of Social Sciences in a Global Times report earlier this year.

US startup a good fit for China electronics player

2014 likely to be warmest year