When US Deputy Secretary of Commerce Bruce Andrews said on Tuesday morning that the SelectUSA Investment Summit had a "powerful start" on Monday, he was facing the huge Potomac Ballroom in the Gaylord National Resort and Convention Center in National Harbor, Maryland.

In front of him, the hundreds of tables where breakfast was served were sparsely seated. Most of the 2,600 registered delegates were missing, including most of the 150 from the Chinese mainland and Hong Kong. It was a sharp contrast to the full house when US President Barack Obama spoke in the hall Monday afternoon to promote the government initiative to woo foreign investment into the US.

Downstairs, representatives from local governments and businesses were busy promoting their attractiveness to foreign investors in about 100 booths set up in the Select USA exhibition hall. Some clearly were targeting Chinese visitors, as evidenced by Chinese-language brochures and billboards.

"We are applying for a visa waiver for Chinese tourists and maybe we will have it by the end of the year," he said.

Kristi Tanner, managing director of JobsOhio, a private non-profit organization, said she was proud of the instrumental role she played in getting China's Fuyao Group to invest in a $300 million automotive glass plant in Dayton, Ohio. The investment allows Fuyao to transform a former GM facility into a modern automotive glass plant.

Fuyao has made three investments in the US in recent years, totaling $500 million and creating an additional 1,500 jobs by 2017. Its chairman Cao Dewang, a noted philanthropist in China, visited the booth on Monday.

While touting the favorable business environment in Ohio appealing to companies like Fuyao Glass, Tanner, whose business card is in both English and Chinese, said Ohio is seeing more interest from Chinese investors.

"The size and significance of Fuyao's investment really raised quite a bit of interest in the state. When I talked to them, I told them Fuyao's story and they all know Chairman Cao. It certainly gets their interest," she said.

Tanner and her people are working to get Governor John Kasich on a trip to China this year at the invitation of Cao. Kasich was present when Fuyao announced a major expansion in Ohio on Jan 13 of this year.

Both Fuyao Group and Wanda Group, which acquired AMC Entertainment in 2012, were cited in 15 recent foreign investment projects in a SelectUSA document distributed at the second SelectUSA Investment Summit.

A videotaped speech by Wang Jianlin, chairman of the Wanda Group, was played at the summit conference Tuesday morning in which Wang explained why he chose to invest in the US. 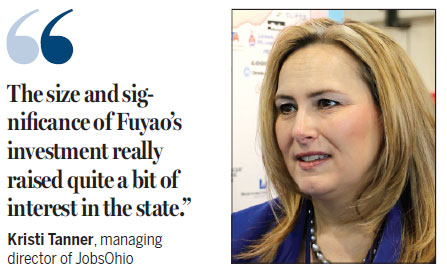 Tanner's colleague, Tao Zhang, is a recent graduate from a US school. Originally from Shanghai, Zhang said that with an increasing number of Chinese companies going global, he wanted Chinese investors to know Ohio's economic strength, in such areas as manufacturing, auto, aerospace, biotechnology and shale gas, low business taxes, low costs and complete supply chains.

"And we will see how our strength and their industries match in order to achieve win-wins," he said.

Monica Wahlberg, of the Wisconsin Economic Development Corporation, said she is helping the work of the University of Wisconsin at River Falls in getting some Wisconsin companies to attend the World Dairy Expo and Summit 2015 in Harbin in northeast China's Heilongjiang province.