Despite tensions over issues such as the South China Sea and cyber security, next week China and the United States will hold their largest annual bilateral meetings to expand cooperation and better manage differences, Chen Weihua reports from Washington.

T heir abbreviations are S&ED and CPE. To some observers of US-China relations, what they represent are simply annual "meet and greet opportunities".

But when they start next week in Washington, the sessions of the China-US Strategic and Economic Dialogue (S&ED) and the China-US High-Level Consultation on People-to-People Exchange (CPE) will take on added importance as a prelude to Chinese President Xi Jinping's meeting at the White House with President Barack Obama in September. 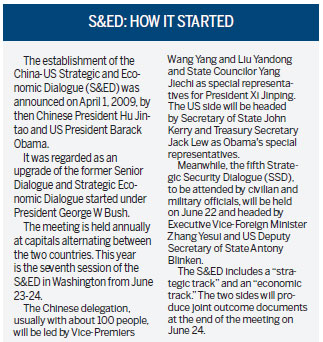 Vice-Premier Liu Yandong, China's highest-ranking female in the government, will lead her country's CPE delegation to the meetings by first spending three days engaging with Americans. She will be in Pittsburgh on Friday and then go to Houston, before heading to Washington for the largest annual bilateral meetings between the two governments.

In Pittsburgh, Liu is scheduled to meet Intel Corp CEO Brian Krzanich. The semiconductor chip maker has a major research facility in Pittsburgh and one in China. Liu and Krzanich had met in Beijing in October 2013.

She will attend an event marking the 10th "Chunhui Cup" Chinese Overseas Students Innovation and Entrepreneurship Competition, and meet Mayor William Peduto at city hall before going to the University of Pittsburgh for a meeting with Chancellor Patrick Gallagher and a tour of the school's Confucius Institute and medical school, where a group of Tsinghua University students is studying.

Liu will then travel to Houston for the weekend and an array of cultural, sports, education and public health events.

On Tuesday, Liu, along with Vice-Premier Wang Yang and State Councilor Yang Jiechi, join US Secretary of State John Kerry and Treasury Secretary Jack Lew for what will be the seventh round of the S&ED and the sixth CPE. Kerry returned to Washington on Tuesday after surgery on his broken femur caused by a biking accident in France weeks ago. It is likely that he will arrive on crutches.

Unlike the CPE, which portrays largely a rosy picture of cooperation and exchange, the S&ED is more like a medley of cooperation, competition and sometimes confrontation.

Producing the biggest headlines between the two countries lately are lingering rows over maritime territorial disputes in the South China Sea, cyber security, the US rebalance to Asia strategy, US military surveillance close to Chinese shores, arms sales to Taiwan, US restrictions of high-tech exports to China and intellectual property rights.

Robert Daly, director of the Kissinger Institute on China and the United States at the Wilson Center, said the atmospherics going into this year's S&ED are "as bad as they've ever been", but he noted that both sides will likely use the S&ED to signal determination to continue cooperating with each other and will accentuate the mutual benefits of engagement.

During his visit last week to Washington, Central Military Commission Vice-Chairman Fan Changlong described his trip as creating a good atmosphere for the September visit by Xi, and said both sides are likely to use S&ED to further pave the way for a successful meeting between Xi and Obama.

And Nathan Sheets, the US undersecretary of the Treasury, said: "This year, the relationships and open communication developed in the S&ED will again play an important role in paving the way for the meeting of our presidents."

Cheng Li, director of the John L. Thornton China Center at the Brookings Institution, quoted Albert Einstein as saying in 1945 that "the release of atomic power has changed everything except our way of thinking." He wrote on the Brookings website on Wednesday that during the last 70 years, Einstein's statement has often reminded us to be critical of anachronistic worldviews in a profoundly changing world.

On the eve of the S&ED and in advance of Xi's trip, Li said policymakers in both countries should be less preoccupied by contentious issues, and more inspired by Einstein's call for a new way of thinking, noting the urgent need for cooperation between China and the US in an age of globalization and the need to establish international norms in cyber security.

Ted Carpenter, a senior fellow for defense and foreign policy studies at the Cato Institute, a Washington-based think tank, said this year's talks should focus on improving bilateral communication on key issues. "Such a modest goal is definitely achievable. It is not likely that the underlying substantive issues can be resolved quickly, since they are all rather complex, but measurable progress should be the goal," he said.

Carpenter believes that US and Chinese officials need to discuss how to reduce tension over the South China Sea, especially to prevent an incident between Chinese and US military forces operating in the area.

"The US side must also take greater steps to show that it is truly neutral regarding the substance of the various territorial disputes in the South China Sea," he said.

The Chinese believe that the US is biased against China in the maritime territorial disputes in both the East and South China Seas to keep its primacy in the region by rallying allies and partners, in particular Japan, the Philippines and Vietnam.

US officials, from Obama to Defense Secretary Ash Carter, have criticized China's recent land reclamations in the South China Sea, but Chinese officials, including Fan of the Central Military Commission, have argued that the construction is being done on China's sovereign territory and is mainly for civilian purpose such as disaster relief and navigation. They have dismissed the US concern by assuring that freedom of navigation will not be affected there for any nation.

China has been a latecomer in land reclamation in the South China Sea, something that Chinese officials said demonstrates China's restraint. US Assistant Secretary of Defense David Shear told a US Senate hearing in May that in the Nansha (Spratly) Islands, Vietnam has 48 outposts, the Philippines eight, China eight, Malaysia five and Taiwan one. China argued that some of these outposts were built on islets and reefs that belong to China.

On Tuesday, Lu Kang, the new foreign ministry spokesman who previously served as deputy chief of mission at the Chinese embassy in Washington, indicated that the land reclamation project on some stationed islands and reefs in the Nansha Islands will be completed in the coming days.

The most costly cities for expats