By May Zhou and Chang Jun in Houston(China Daily USA)

On the morning of the second day of her visit to Houston, China's Vice-Premier Liu Yandong played a little hoops - making a basket after three tries - and tipped off the ball for a basketball scrimmage between the Tsinghua High School team and the Houston Select U18 Boys team on Sunday.

The NBA invited the Tsinghua High School team to visit Houston from June 16-21 to attend six days of basketball clinics conducted by the Houston Rockets' player development coach Kevin Burleson. The program is part of a partnership established between the NBA and China's Ministry of Education in October 2014.

The partnership aims to promote basketball education in Chinese schools. Its goal is to provide enhanced basketball training to at least 3 million elementary and high school students by 2017. The unprecedented partnership is the NBA's first collaboration with China's education authority and the ministry of education's first partnership with an American professional sports league.

"The China-US relationship is the most important bilateral relationship," Liu said during a meeting with NBA officials prior to the game. "Only by deepening the people-to-people exchange in various fields can we build a strong social foundation for it. Sports are one of the earliest areas included in people-to-people relationships, and the NBA is the champion at doing this."

"On behalf of the Chinese government, I bring gratitude and appreciation to people in the NBA and the basketball sector for all you have done to promote that friendship," she added.

Liu said she hopes to get support from the NBA to help grow basketball in China and learn more from the NBA about the management and operation of the sport.

NBA China CEO David Shoemaker said that the NBA is "especially proud of the partnership we have with the Ministry of Education with a focus on youth basketball education. Since the signing of the agreement last October, we have conducted four basketball clinics and two coaching clinics. Since I became NBA China CEO, we have trained 2,000 Chinese children and coaches in basketball." 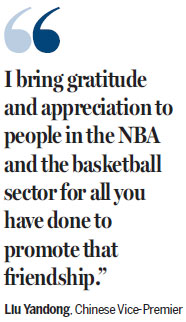 Houston Rockets CEO Tad Brown said he was honored to host Liu and her delegation and the Rockets had enjoyed a tremendous relationship with basketball fans in China over the past decade.

Brown was thrilled Yao Ming was visiting his old NBA team. "Yao Ming is part of our family. The very first NBA broadcast in China was the Houston Rockets' world champion game back in 1993. At that time there was a young Chinese man called Yao Ming who saw Hakeem Olajuwon play for the first time. That helped to create his love of basketball. By those forces here we are today with Yao Ming. It's been a pleasure for us to be part of the understanding and growth of Chinese sports. We are happy with the role we can play with Chinese youth."

Shoemaker said it was wonderful to have Vice-Premier Liu visit Houston and witness basketball diplomacy between high school students from Houston and Beijing. "It's a statement of how important the partnership is to her," Shoemaker said.

Prior to the start of the game, Liu and Yao Ming met with the high school players. Speaking to the young people, Liu mentioned that China and the US resumed their formal relationship through "ping pong diplomacy" 37 years ago, encouraging the young players from Tsinghua to learn from their US counterparts about teamwork and sportsmanship.

"I hope you folks can play an active role promoting people-to-people exchange through this sports activity, and in the future can contribute to the China-US friendship," she said.

Wang Shaojie, a member of the Tsinghua team, said he had learned a lot during the week of training.

Speaking of meeting Yao and Liu, Wang said: "We appreciate Vice-Premier Liu's coming to watch us play and cheer us on."