The number of Chinese students applying to US graduate schools dropped by 2 percent in 2015, the third consecutive year of a decline in applications, according to the Council of Graduate Schools (CGS).

US graduate schools received 676,484 applications from abroad this year, a 2 percent increase over last year, according to preliminary data from the CGS' annual report released on Tuesday, with two-thirds of the applicants from China or India.

"It's a concern for US institutions," Jeff Allum, director of research and policy analysis at the CGS, said about the decline in applications from China. "China's a source for one-third of all international graduate students coming here, and clearly the competition for China's top talent is heating up," he told the Wall Street Journal.

Julia Kent, director of Communications, Advancement and Best Practices with the CGS, wrote in an email to China Daily that many countries are aware that China has been investing "a great deal" in its domestic graduate education system in recent years.

"The expansion of programs in China may partly explain why Chinese students have greater incentive to pursue graduate degrees at home," Kent wrote. "However, as global competition for graduate students increases, we have seen US universities becoming more innovative in their efforts to recruit top talent.

"US graduate programs are still recognized internationally for their excellence, as the overall increase in applications would suggest," she wrote. But "some universities are increasingly using 'virtual' methods of communicating with prospective students in addition to conducting recruiting fairs abroad."

Philip Altbach, the founding director of Boston College's Center for International Higher Education, said some US schools do not have the same level of name recognition in China, which may be influencing some Chinese students' decisions about choosing comparable alternatives closer to home.

"The premium on a foreign degree that's not a gold-plated, name-brand school, is less than it once was," Altbach told the Journal.

Last week, China's Vice-Premier Liu Yandong said that she would like to see more American students studying in China.

"Right now, there's a deep imbalance, and we hope that there will be more American students in China," she said during a plenary session of the China-US High-Level Consultation on People-to-People Exchange (CPE) on June 24 in Washington.

There are nearly 275,000 Chinese students studying at US college and universities, whereas only about 15,000 American students are pursuing an education in China, according to data from the Institute for International Education (IIE), a non-profit organization that compiles data on international students.

The total number of applications to US graduate schools in 2015 by international students marked the 10th straight year of gains, data from the CGS report showed.

The CGS International Graduate Admissions Survey has been conducted annually since 2004. 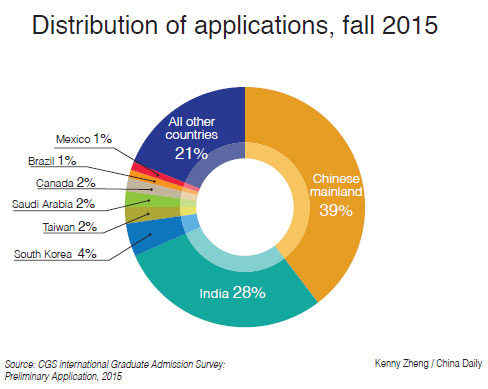