IQiyi, the online-video unit of Baidu Inc, has purchased the Internet broadcasting rights of 800 film titles from Paramount Pictures Corp.

"This is the first time that one of the 'Big Six' film studios of Hollywood has signed an agreement with a Chinese online video-viewing website, sharing such a big library," said a statement on iQiyi's website.

The 800 Paramount films to be featured on the iQiyi platform include the Transformers series, The Godfather, Forrest Gump, the Mission Impossible series, the Shrek series, Terminator series and the Kung Fu Panda and Madagascar series.

IQiyi's deal with Paramount is considered a move to meet the increasing demand for Hollywood content from users and to boost and promote paid services.

The statement said that "from 2014 to 2015, the iQiyi VIP paid service, which mainly provides pay films, showed an explosive growth," which set the stage for iQiyi to purchase films' online licenses across the world.

IQiyi recently announced that it has 5 million paid subscribers. 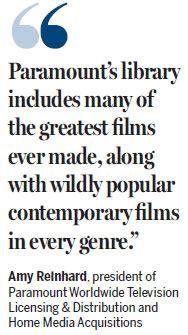 To date, iQiyi has around 6,000 films in its library from China, the US, Japan, South Korea, India and Europe.

It is not the first time that iQiyi and Paramount have teamed up; in 2011, iQiyi purchased the online license for Transformers 3 on the Chinese mainland from Paramount.

"IQiyi first licensed content from Paramount four years ago. As a result of iQiyi's growth and success, the two companies agreed to expand on the licensing agreement," Amy Reinhard, president of Paramount Worldwide Television Licensing & Distribution and Home Media Acquisitions, wrote in an e-mail to China Daily.

"Paramount and iQiyi have developed a successful working relationship over the last four years, and iQiyi has proven itself to be reliable in terms of content protection," she said.

"Paramount's library includes many of the greatest films ever made, along with wildly popular contemporary films in every genre," Reinhard said. "The wide selection of premium content that this licensing agreement will make available to iQiyi's subscribers will greatly enhance the company's offerings and make the service that much more appealing, particularly to younger Chinese consumers who have great interest in Hollywood films."

According to iQiyi's statement, some of the Paramount films online have been very well received. Some upcoming movies from Paramount also are included in the agreement.

"IQiyi has an excellent team of professionals who have worked diligently to improve the company's offerings and grow its subscriber base," Reinhard wrote.

IQiyi is the second-largest online video site in China.