With two major acquisitions closed in October 2014, COFCO is building across five continents.

"COFCO (which stands for China National Cereals, Oils and Foodstuffs Corp) is the first Chinese food corporation to achieve the scope of 'from farm to table' operation in China, from planting and financing farmers to processing, manufacturing and more," said Liu Mengze, COFCO's president of US operations. "However until last year, we were mostly doing basic buying overseas."

The acquisition of two major grain traders is COFCO's major step toward globalizing its food chain to secure resources. In North America, the deals provided COFCO a handful of grain elevators in Chicago and Milwaukee.

China has transformed from a large exporter of agricultural commodities to a major importer over the last two decades. Liu joined COFCO in 1994, where his department handled corn. He remembered China exporting more than 10 million tons of corn a year.

Urbanization and changing dietary habits in China are the main reasons behind the transformation.

On average it takes six bowls of grains to get a bowl of meat on the dinner table. 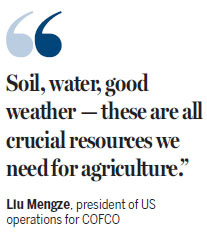 "Now China imports more than 70 million tons of soybeans every year," stated Liu, where a dozen jars of different soybeans are displayed in the office conference room.

"It didn't happen overnight. In the past years, COFCO had done a good amount of preparations and researches," said Liu. "Both Nidera and Noble got good global presence, and many of their operations complement each other," which led to the decision of acquiring both companies at the same time, Liu added. "With the new assets, we are now among the top three agribusiness giants in the world."

"Soil, water, good weather - these are all crucial resources we need for agriculture. China has vast territory and abundant resources, but we got a large population depending on it," said Liu. "We want to not only utilize the resources in China, but also the resources around the globe to better assure our grain supply and food security.

"For example, if there is a natural disaster somewhere in China, it would affect our grain supply," Liu said. "This is when global full-value chains become important. While China is experiencing a drought, America may be having the perfect weather for crops. Like this year, due to the El Nino phenomenon, the northern part of China is going to experience a drought.

"At the same time in North and South America, the weather is expecting to be favorable," Liu explained. "Also, the price of grains is largely affected by weather. Global operations help us to control risks."

Technology also has been motivating COFCO to evolve. Once a food importer and exporter, COFCO is now directly serving consumers on a daily basis online. Womai.com, launched by COFCO in 2012, is now the country's largest online food retailer, led by sales of imported wine and food.

On the main menu at Womai, there is an option of "direct imported food", another step to improve food security.

Hundreds of items from around the globe - such as Ocean Spray dried cranberries from the US, Jacobsen's butter cookies from Denmark and Gobber strawberry jelly from Germany are now available to consumers.

COFCO oversees every step between production of food items in foreign countries to logistics in China to make sure customers get what they are paying for, which is often cheaper than buying though a third-party retailer.

US, Cuba set to reboot relations after split