China Eastern Airlines Corp and Delta Air Lines Inc have had a long partnership, and now they have taken it to the next level.

Delta, the world's third-biggest airline, on Monday announced it will invest $450 million for a 3.6 percent stake in China's second-largest airline, making it the first major US airline to own part of a Chinese airline.

Under a conditional agreement signed by the two carriers, Delta will invest in China Eastern's H-shares, which trade on the Hong Kong Stock Exchange. The investment equals approximately 10 percent of China Eastern H-shares and 3.55 percent of the total shares, according to a joint statement released by the two companies on Monday.

Delta, based in Atlanta, Georgia, also will get an observer seat on the Shanghai-based airline's board of directors. But the deal is conditioned upon a final marketing agreement and approval by each carrier's board, the statement said.

James Wang, China Eastern's board secretary, told Reuters that the airlines could work together in other regions, such as in Europe.

Wang said it could help grow China Eastern's international business, which makes up 35 percent of revenue.

"There are lots of ways we can cooperate with each other, and not just limited to the China-US routes," Wang said.

"The tourist market promises a great potential, and the cooperation in civil aviation between China and the US is an inevitable trend," Xia Xiang, economic and commercial counselor of China's Consulate General in San Francisco, told China Daily on Tuesday.

Last year, 12 direct flights were launched between China and the US, and 10 more are expected to be added this year, he said.

"The market means cooperation as well as competition," Xia said. "It's a good thing the Chinese and US airlines can partner with each other, taking advantage of their strengths to better allocate and integrate their resources." 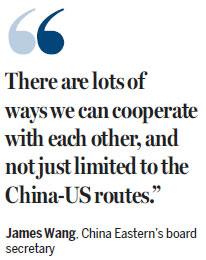 "For the past three years, Delta has welcomed members of the China Eastern team at our headquarters for sharing best practices and work-study opportunities," Delta CEO Richard Anderson said. "We have learned much from one another already and look forward to deepening our already effective partnership."

Delta recently moved its operations at Shanghai's Pudong Airport to Terminal 1, alongside China Eastern and Shanghai Airlines, to provide more convenient connections and offer a seamless airport and baggage experience for customers.

China is the second-largest outbound travel market for the US and is projected to grow more than twice the global average, becoming the largest market from the US in the next few years.

Driven by rising incomes and relaxed visa requirements, the number of outbound Chinese tourists has steadily risen. More than 2.18 million Chinese people visited the US in 2014, and the number is expected to double to over 4 million by 2020.

Delta has grown its China network by nearly three times in the past five years. It offers daily service to Beijing from Seattle and Detroit, and to Hong Kong from Seattle; it will also operate 28 weekly departures to Shanghai this summer.

"Delta has nearly tripled the size of its China network in the past five years," said Vinay Dube, senior vice-president of Asia-Pacific at Delta. "Pairing up with China Eastern increases our reach and further cements our commitment to the market and to our customers who travel between China and the US.