Chinese and American pundits hope that the state visit to the United States by President Xi Jinping in September will be another major opportunity for the two nations to expand cooperation and manage key differences.

The world's two largest economies have not only become increasingly interdependent economically, but have witnessed closer ties in a wide spectrum of the relationship, such as the growing number of Chinese tourists and students in the US.

But strategic distrust remains, as manifested by differences in cyber security; China's maritime territorial disputes with some of its neighbors; the US rebalance-to-Asia strategy; the US attitude toward China's One Belt, One Road initiative; and the China-led Asia Infrastructure Investment Bank (AIIB).

Richard Bush, director of the Center for East Asia Policy Studies at the Brookings Institution, said that the two leaders should avoid polite talk but not critical issues, despite their mutual respect.

He suggested that the two presidents produce a work plan for the two countries to follow over the next 18 months - the remainder of the Obama administration - to focus on issues that require presidential leadership.

"A lot of the issues can be dealt with at S&ED (Strategic and Economic Dialogue) and through agency interactions, but some issues really require presidential direction and presidential monitoring to ensure that they are addressed to the best interests of countries involved," he told a seminar on China-US relations on Wednesday at the Brookings.

Su Ge, president of the China Institute of International Studies (CIIS), believes the upcoming state visit will be a milestone. While noting that cooperation and competition coexist in the bilateral relationship, Su said that only by strengthening cooperation could the two countries achieve a win-win situation.

"The best way to manage differences is to increase mutual trust," Su said. He suggested cooperation on maritime issues, such as exploring how to better ensure freedom of navigation, and work on cyber security.

Su, a diplomat for many years, said China and the US also could work together on regional issues. He noted that AIIB, One Belt and One Road and other initiatives are aimed at complementing and improving the current political and economic order and are not exclusive in nature.

On global governance, Su believes that the climate change deal between China and the US last November has set a good example for more such cooperation in the future.

Cheng Li, director of the John L. Thornton China Center at the Brookings, believes the two countries are making efforts, through official and semi-official preparations, to ensure that Xi's visit is a success.

"This is not only the hope of the leaders of the nations, but their people as well," he said. 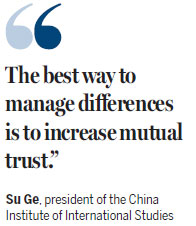 Li said that the enormous common interests and complementary nature of the two economies have created a good environment for mutual cooperation.

He is more worried about misunderstandings, whether it's the Chinese who believe the US has changed its China policy, or Westerners who either think China is too powerful or too weak.

"These are all incorrect views," he said.

Jonathan Pollack, a senior fellow at the Thornton center, estimated that Xi's trip to Washington is going to be brief, at most 24 hours.

He hopes China could show some flexibility with respect to the discussions with its neighbors in ASEAN, clearly referring to the maritime territorial disputes in the South China Sea. He said that if there is an announcement by all parties to freeze their activities in the South China Sea, it would help reduce negative press coverage in the US.

Teng Jianqun, an expert on US studies at the CIIS, said the South China Sea situation became complicated in 2009, after the US launched its rebalance-to-Asia strategy.