Wang: China won't be a rival to US

Foreign Minister Wang Yi refuted the notion that China will become a major rival of the United States or supersede it.

In a 90-minute talk at the Center for Strategic and International Studies in Washington on Thursday morning, Wang said China will focus on its own development for a long time and has no intentions of challenging any other country.

According to Wang, the interests of the two countries have become so interconnected and interdependent, that only cooperation can ensure a win-win scenario, while conflict is destined to bring about a no-win situation.

"What's more important is that China is China. Even if China enjoys further development in the future, it will not become another United States," said Wang, who wound up his three-day US trip on Thursday.

He said China will strengthen its ties with nations across the world and play its role in a unique Chinese way and with Oriental thinking, something he described as based on "harmony and inclusiveness".

"The surmise that China will become a major rival of the US and even supersede the US is a false proposition," Wang said.

He also briefed the audience on Chinese economic development, reiterating China's determination to switch to a more sustainable development model and its commitment to reforms and further opening up.

Wang assured the audience that China's development will provide even greater opportunities for the US and the rest of the world.

Trade between China and the US hit $558 billion in 2015, making China the largest trading partner for the US.

He said the policy priority is to let more people and nations understand the social system and development path China has chosen and to firmly protect the international order and system established after the victory of World War II.

He explained that the Asian Infrastructure Investment Bank (AIIB) initiated by China is complementary to the existing global financial system rather than a challenge to it.

He said China's foreign policy will more actively serve the country's own development and effectively protect China's interests overseas, citing China's Belt and Road initiative to promote development and connectivity in the region and the world.

He vowed that China will become more actively involved in tackling global and regional hot-spot issues, as China already has done and has been doing regarding Iran's nuclear agreement and reconciliation in Afghanistan, Syria and South Sudan.

While CSIS has hosted many contentious talks on the South China Sea, Wang said that the situation in the area is stable as a whole, and freedom of navigation has never been affected. 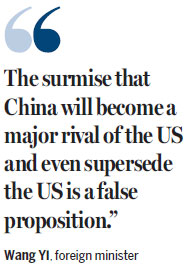 "I thought he made a wonderful presentation. It had a lot of facts. And he was very, very presentable," said Carla Hills, former US trade representative from 1989 to 1993 under president George H.W. Bush.

"I think the whole audience was extremely impressed. I feel privileged to be in the audience," said Hills, also chairwoman of the National Committee on US-China Relations.

Douglas Paal, vice-president for studies and director of the Asia program at the Carnegie Endowment for International Peace, described Wang as "a very self-confident, well-briefed minister of foreign affairs" and "a very reasonable presenter".

"He is taking the opportunity to talk past media and directly to the American people," Paal said.

Scott Kennedy, deputy director of the Freeman Chair in China Studies at CSIS, said he was impressed that Wang wanted to talk at CSIS.

He also was complimentary of Wang for speaking so long, he was open to a long Q&A session, he went into great detail on China's position on the South China Sea, and the Philippines' case at The Hague.

"He made some useful points from the Chinese position," Kennedy said. "He is willing to engage in a dialogue."